I much prefer this garden covered and growing various flowers and edible plants but the past several years the whole thing was being taken over by oxalis and other weeds. Due to an injury I could not keep up with it so I let it go for a few seasons. The main cover used was birdsfoot trefoil which drops a ton of seeds and it smothers a lot of things, but any chance the oxalis had to grow in ther it would exploit along with the mouse-eared chickweed and some purselane. I don’t really mind having some edible weeds around so it is ok to leave the purselane here or there. The above view is where I have finally been able to get started on clearing it back out again. Some of the views below show where it is at last finished. I’ve been able to keep up with it since including some weeding in December of all times, but the weather cooperated and so why not?

Earlier versions of this garden are described in the red patch project and of course you can see some other views in other spots around the website, but since I have moved on from the largely monocrop red patch to making a more useful space it has become a lot more interesting to me. Over the years since it was the red patch it has been planted in beans, garlic, onions, various ground covers, plenty of flowers and even tried to get some seedling tulips to grow (which have always been eaten by rabbits, deer, etc.).

A picture of the beans struggling along in this heat and lack of rain - also being eaten by the various creatures. 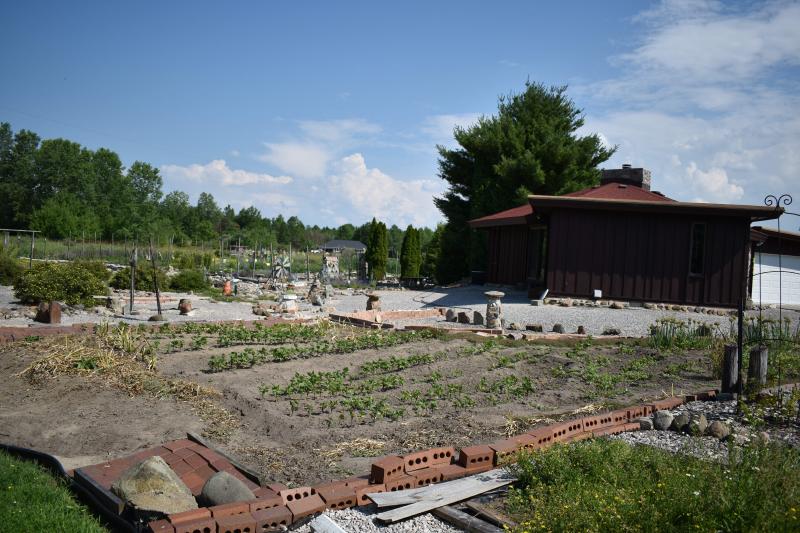 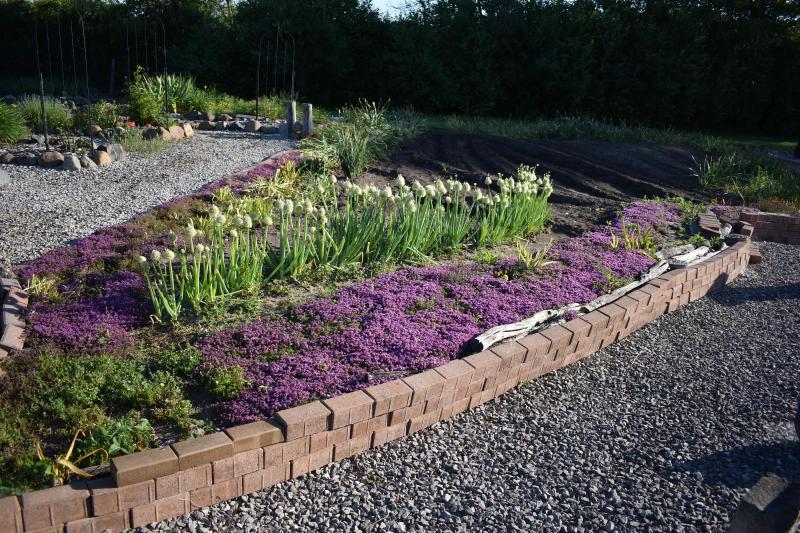 The spring of 2020 from a few angles. The first is from the top SW corner looking at how the creeping thyme is working out. I still have a ways to go to get it established along all the edges all the way down and across, but I think you can see how nicely it is going so far. I also like the color of the foliage in the spring. 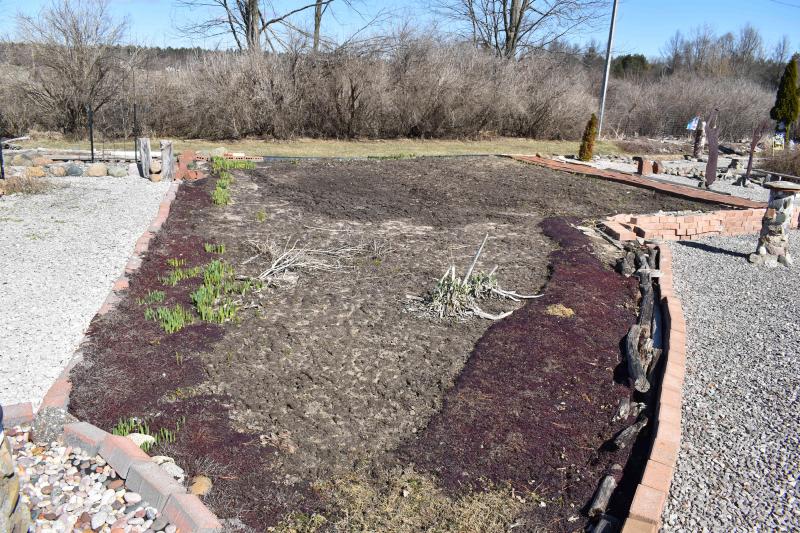 In the fall of 2019 I moved a ton of daffodils from inside the interior space that were getting in the way out towards some edges hoping to help discourage more of the herbivores from thinking this is such a tasty garden. I don’t think it is working (notice the deer tracks…)… In this picture you can see some of them starting to sprout and get ready to bloom for the spring. 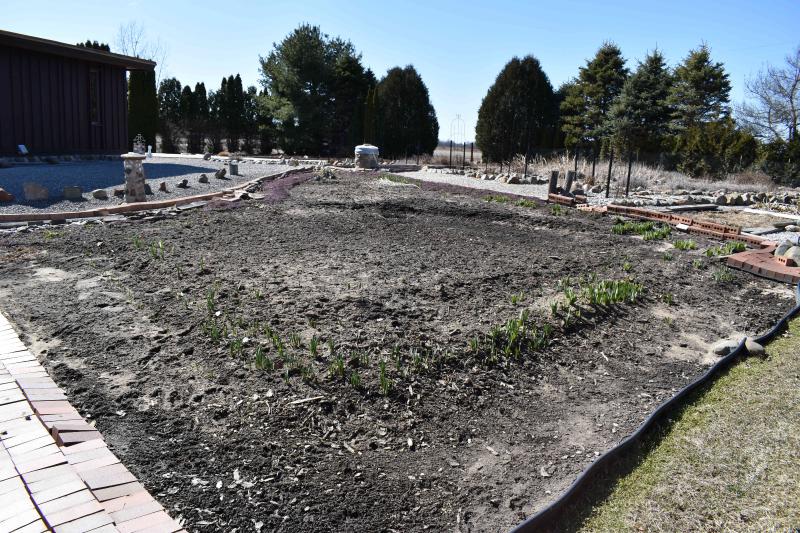 After several months of neglect I finally got back to this garden to get it weeded and planted with beans. At last it is being put back into production after several years even if there is no fence around it I can usually get some beans to produce for me, the deer and other creatures may feed on them a bit, but usually they won’t eat everything - we’ll see how it goes… 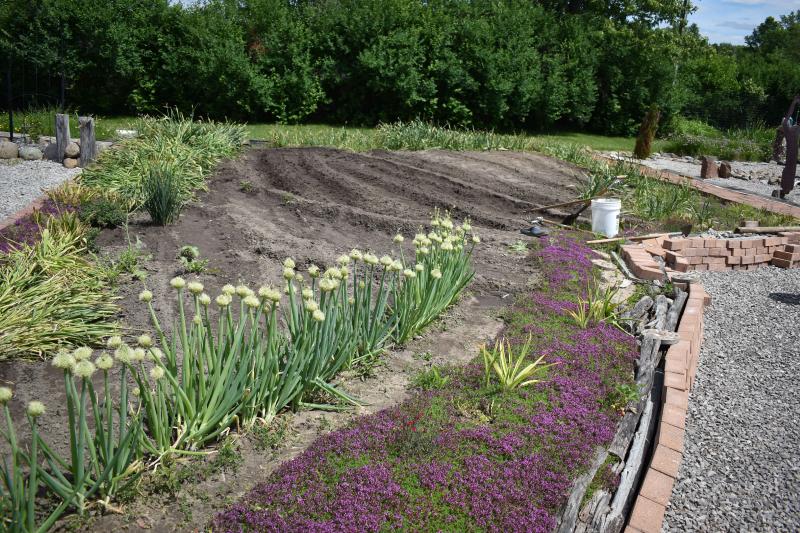 I have done some changes to the projects that have North Garden content, mainly the Garden Tasks project now is thinned down a bit and a lot of that moved here. So if you think you’ve seen this text/pictures before elsewhere, well, you probably have. :) And yes, I do need to re-write and organize this better but that isn’t happening right away - garden season is starting up.

When I was working on the north garden diversion and water catch another reason I had to clean up that edge was because the horsetail was running under the black plastic barrier and then coming back out again. The distance in the last horsetail picture is about 7m wide by 2-3m tall. I actually like the plant, I just don’t want it in the gardens. The roots can run quite a ways without ever surfacing and it doesn’t take that much at all of a fragment to start another plant growing. At first I was trying to remove it carefully, but after a few years it had spread to cover almost half the garden and so I ended up digging it out by double digging the whole space. Still some remains here or there. 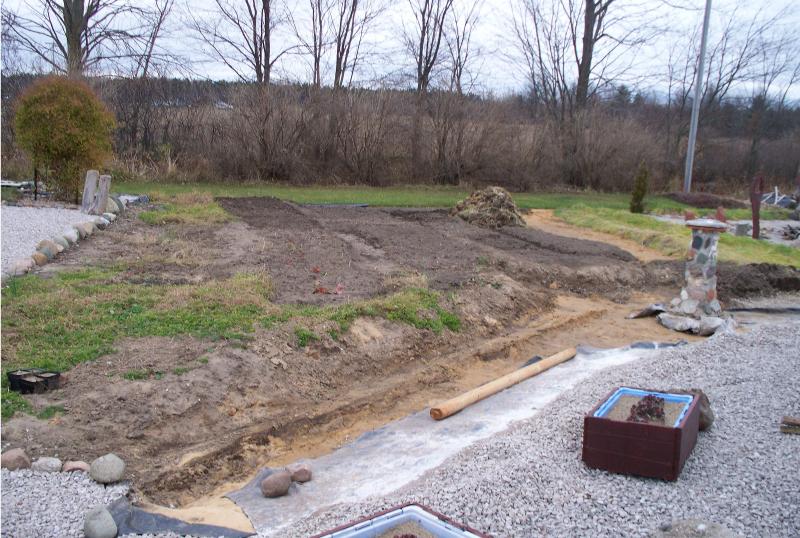 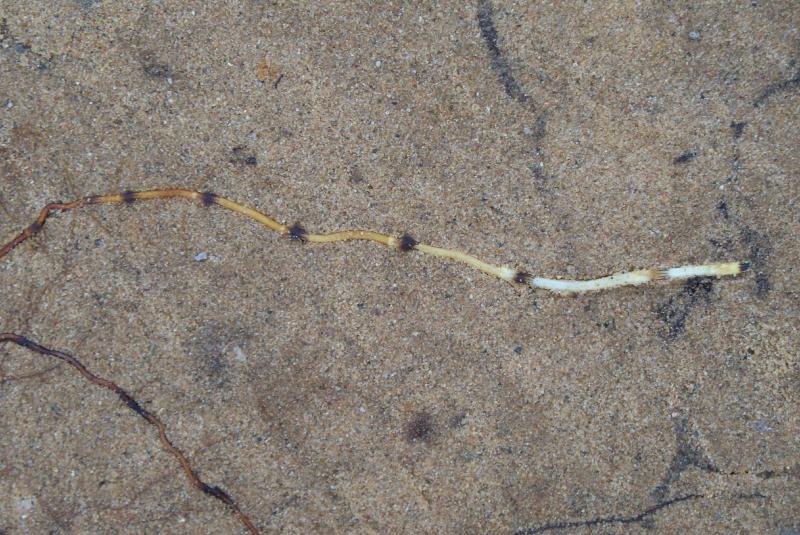 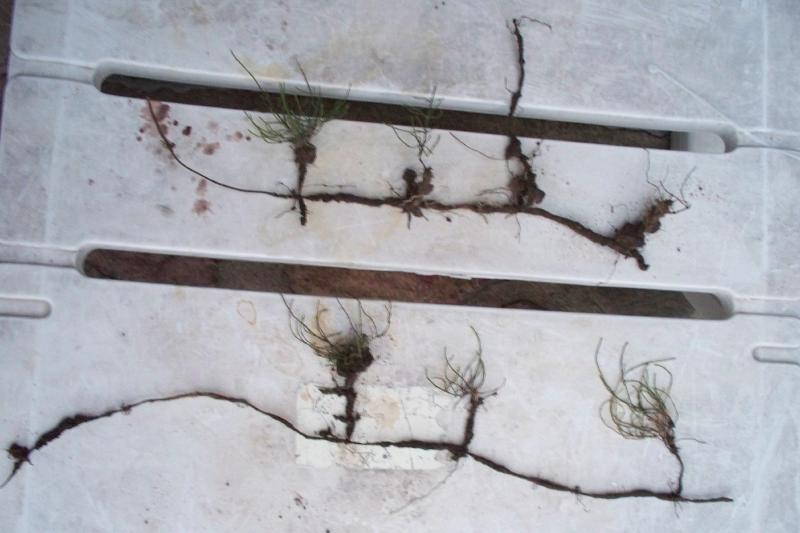 In the north garden one of my strawberry patches was being taken over by sow thistle. I don’t like to use weed killing sprays and I need the exercise so digging it all out one dirt clod and root at a time is how this job gets done. We joke that I am digging to China. All that green stuff is mostly weeds that I’m also removing and burying as I work my may from right to left (sow thistle is not buried because it comes back from very small root fragments those weeds and grass roots get put back on one of the weed piles where they are dried out in the sun). This garden is 2nd to the last in priority (because it is not fenced) but we’ve done a pretty good job in keeping the rest of the gardens up so I’ve finally been able to get to this project - it has been on my wish list for getting done for a few years now. I hope I can finish up getting the whole garden back in shape before the end of August and will of course do an after picture! 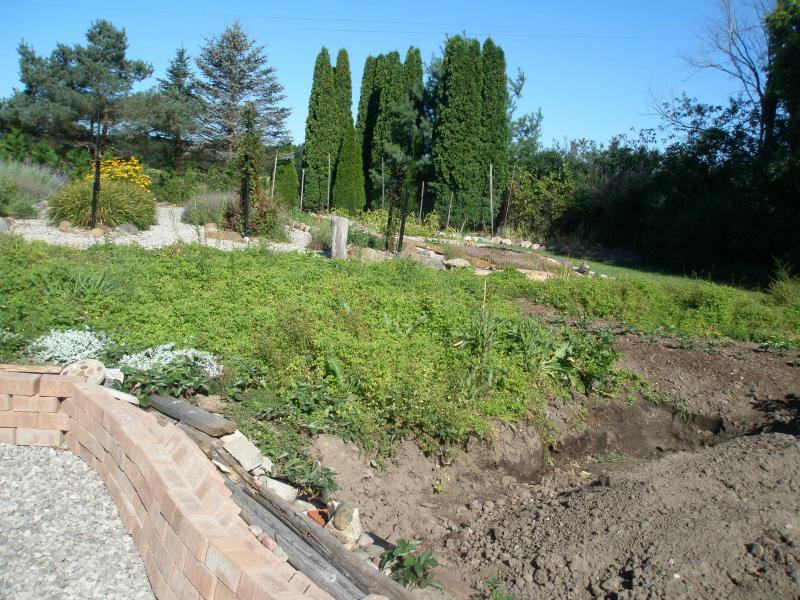 I did finish up most of it by the end of August. Yes there is still plenty left to do in there but the worst of it is now done. With it taking so long already there are fresh weeds showing up in there, but so far none of them are the sow thistle - I’ll have to keep an eye on it to make sure any bits I missed don’t have a chance to recolonize the space. Of course, there are always wind-blown seeds and others left-over from before that I will have to make sure don’t get a chance. Some of the strawberries that I transplanted are alive and putting on some new leaves. I never planned on doing much work along the west edge and it still needs a little more to clean it up around the bird bath. 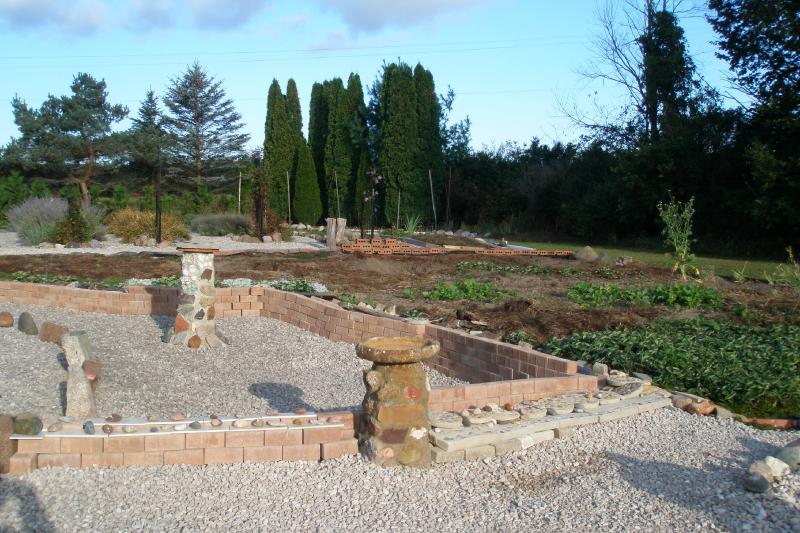 What a year 2017 was and this poor garden was sorely neglected, but I’ve finally gotten back to it. A work in progress… 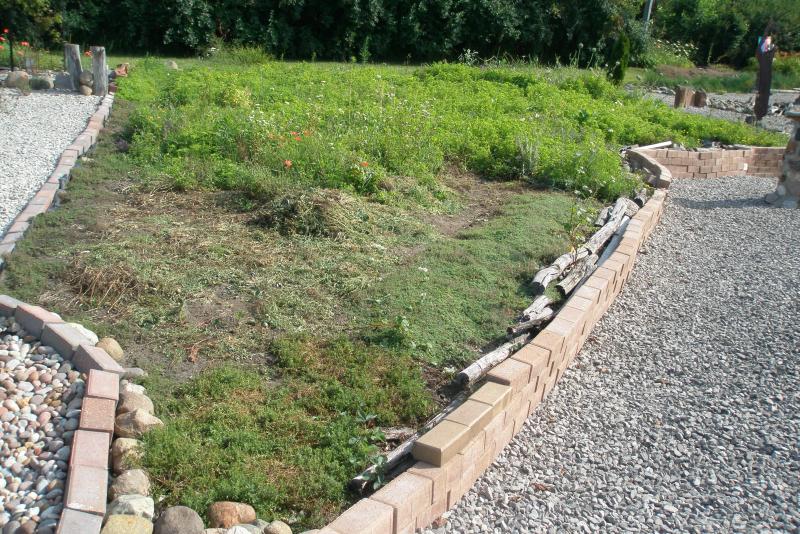 This garden finally got cleaned up again the summer of 2019 (pulling an achilles tendon is not anything I recommend to anyone) including our all new Road To No Wear (all puns and misspellings intended). 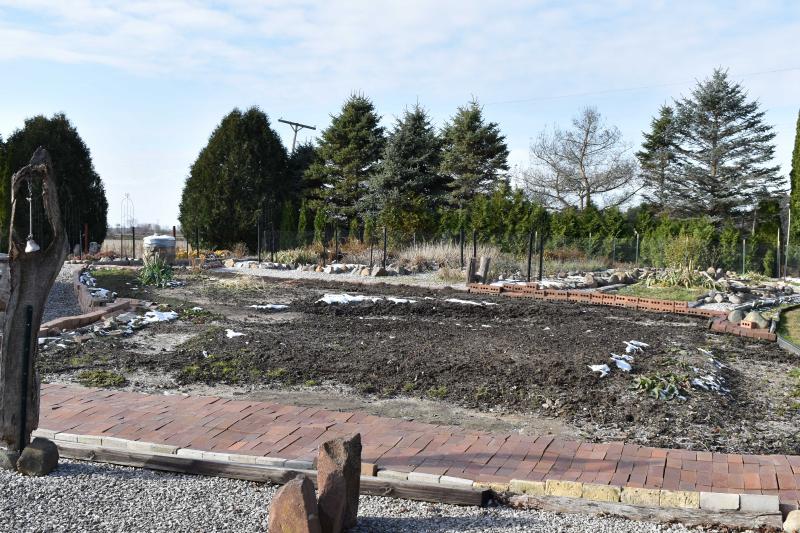