Some people have strange hobbies. I have been processing veggie, fruit and other food scraps in various ways since May of 2010 and learning a lot about worms, fungi, bacteria, soil science, botany and biology.

I started small, 30 worms and 12 night crawlers. Yes, that was the first square bin that I used. A short while later I learned that night crawlers do not do well in captivity so I let them go. The 30 worms became several hundred by the end of that summer, when I did my first and last worm census. Those first 30 worms were called Belgian Night Crawlers and I bought them from the bait store along with the night crawlers. It was a very dry spell for us then and I could not find any worms in the gardens or even in the bottoms of the ditches. Those Belgian Night Crawlers are an excellent composting worm if you have some soil you want to refurbish. They show no signs of being able to survive our heat/cold spells. Eventually, I did get outside when there were other worms to be found and since then I have added those to my mix of worm species. I have four to six different species in each bin/bucket.

Most people do not use earthworms or dirt when they are composting. They have different goals than I. They also have holes in the bottoms of their buckets or buy a fancy worm tower. I have intentionally kept it very simple and very inexpensive, also I don’t want those worm generated nutrients lost or have to mess with them often, instead I want them to recharge my garden soil.

Ok, what is new with the worms? It has been a while since I updated this project.

First a picture to give an idea of how simple this can be. What started as a single square bin became that plus another 15 buckets. The head chef here can cook for a lot of people at one time once or twice a month. You probably won’t need that many containers. 😄 P.S. They do make excellent pets… Very quiet. You can leave for a few weeks at a time and they probably won’t even notice. 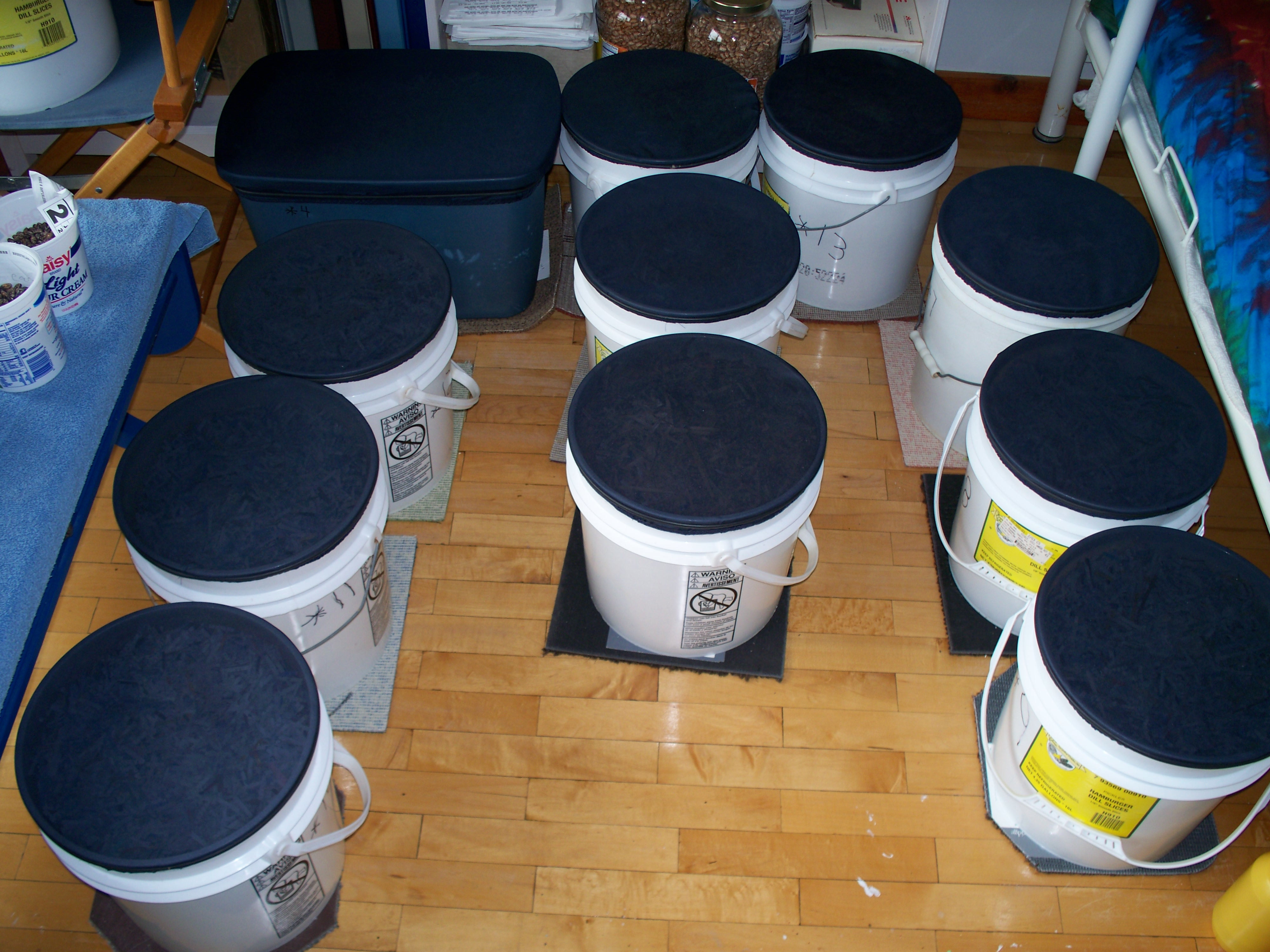 And another showing some of the worms showing them busy at work. 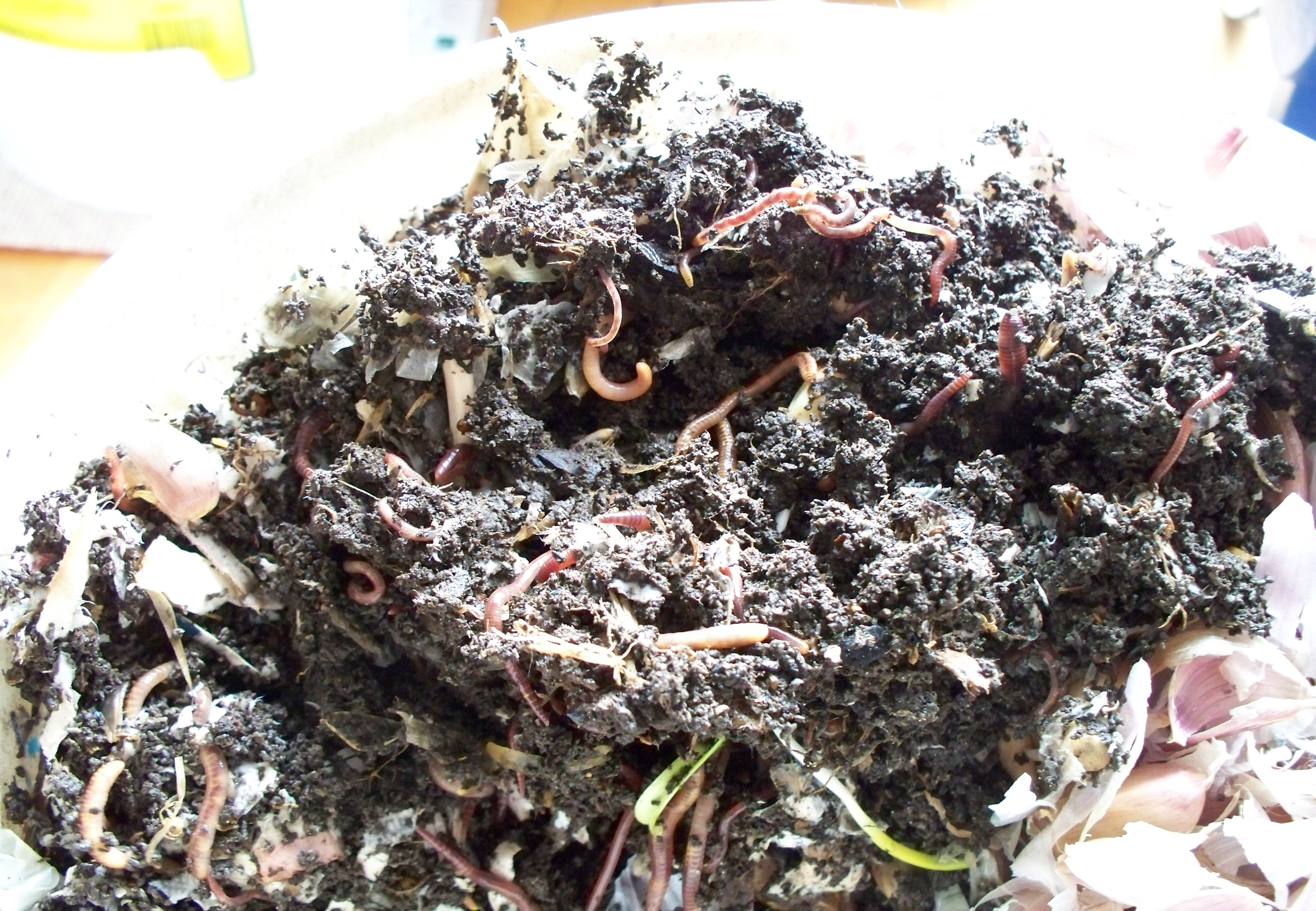 After six years of worm keeping I’m still amazed by all that they do. I’ve also done various things that others say should not be done, but in the end the worms seem to come through ok. It is a matter of patience and trying things. I’m up to 15 bins now with one being the square blue and the rest being the pickle pails. I had one bucket crack as it got old and the plastic had gotten brittle.

Each spring planting season I have the same basic routine down where I take most of the bins out into the gardens and put 3⁄4 - 4⁄5 of the bin into the garden under the spaces where I’m planting veggies (worms and all) leaving just a few behind to restart the bin [I slice down through leaving some of the worms closer to the top so that my species mix in the bin is not reduced. I want the compost worms at the top (which don’t need dirt) to be represented in the bin along with the various species of earthworms] Then I take some of the existing garden soil back into the bin and add any food scraps/etc. again to keep them going. Eventually the worms and garden soil get mixed as I keep adding new stuff and burying things to be broken down. By the next year it’s all ready to go back outside again. If any of the bins look like they could use more worms I keep the larger bin fairly full and so it can be used to top off any of the other bins. In this way I refurbish several hundred pounds of garden soil each year and add many worms to the gardens. As most of the worms are not yet native worms and adult earthworms don’t generally do well when transplanted they don’t survive our hot dry summers or the very cold winters. But as I am going along now I am raising more native worm species and in a year or two I should have more native worms going back to the gardens.

Another interesting thing I’ve been doing is using the dirt and worms to clean up and start breaking down bones. We don’t eat a lot of meat here, so it isn’t common for us to have bones and even when we have meat it usually doesn’t have bones either. That said, once in a while, I would rather give the worms some food than to throw away such a valuable thing that some other creature has given up it’s life for providing. If I had a bone grinder I would use that, but I don’t, so the whole bones go into any of the worm bins, gets buried under some of the dirt so it doesn’t smell at all. Within a few weeks they’ve found it gradually clean any bits of meat and fat off of it. Burying the bones in the gardens along with the worms will be a long term source of calcium and other trace nutrients. Not that they don’t get enough calcium here with all of our crushed limestone.

So that is what’s new, more bins, trying a few different things, and using these amazing creatures to continue to break down any scraps of anything brought in from the garden along with feeding them anything else that is organic that comes through the house. Very little trash goes out for the garbage truck and the garden soils keep improving (from our basic clay in the low spots).

I have this picture in another location but I like to keep it handy as a reminder of all that the worms can do for improving the soil when fed all the household scraps.

Worms and Regenerated Soil Added Back to a Garden: 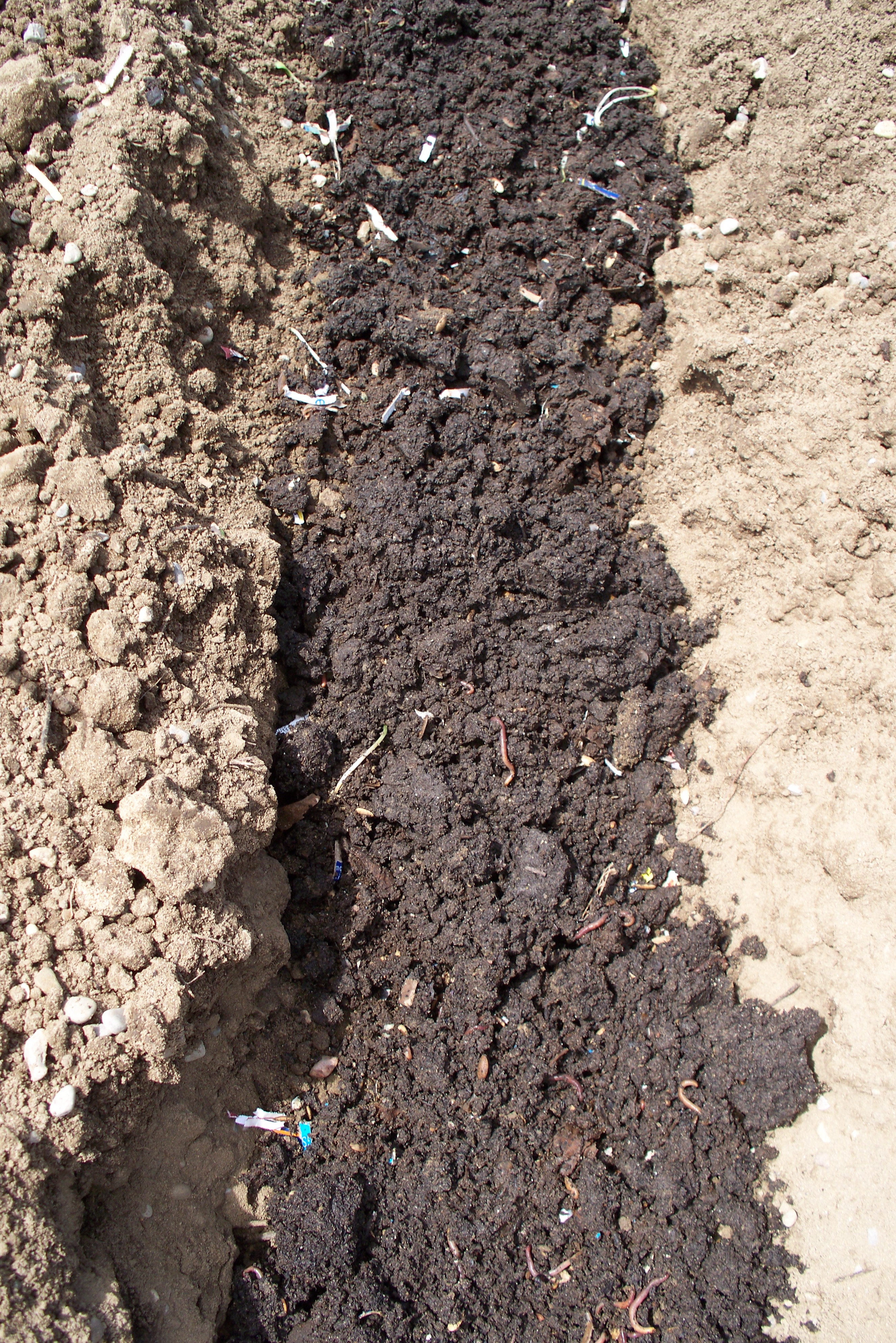 Yes, that light soil is about the condition of our garden soil when I start a new garden patch (after I’ve added some sand). We have almost all clay, which is actually very fertile soil when treated properly. I have to stay out of there when it gets too wet and it can be messy, but who doesn’t enjoy playing with mud pies!

In my various readings about worms I keep finding out interesting things they do for the soil. Mainly they are little bacterial factories in many ways similar to the human digestive system they are set up to ingest food, grind it up and then it goes further along to feed a large number of bacteria which in turn end up feeding the worm. They secret calcium into that mix. What comes out the back end is great for plants.

I will save details on my nutrient cycle for another time. That is how do I feed the plants when I don’t use fancy fertilizers? The short answer is worms, green manure and various organic materials - yet on the whole the worms do most of the work for me. Which is why they get a lot of consideration and admiration from me. 😄

One last picture for now of worm cocoons:

The larger brown cocoon is from a night crawler the smaller ones are from the other earthworms and composting worms. The colors can vary, I’ve seen browns, tans, yellows and greens. So now if you are out in the garden and find some of these you know what they are. The tiny worms develop inside of these until they hatch. It will take anywhere from 60 days or more to grow up and become an adult worm (when the ring shows up around them). A night crawler may take a few years to reach adult size. 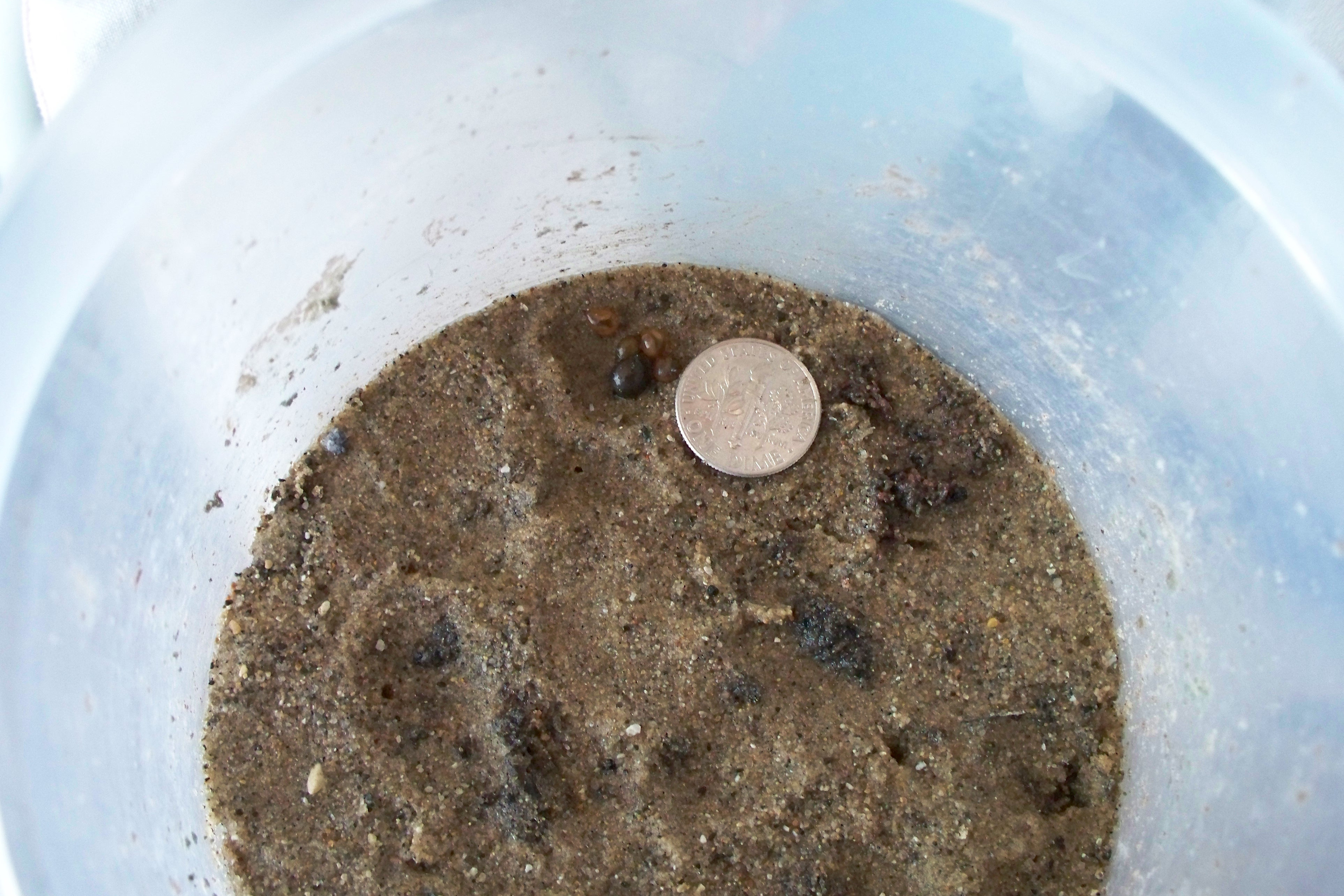 This year the annual Running of the Worms was held as usual when the gardens were getting planted. As I had downscaled to 10 buckets this past year I had fewer to carry out to where they were going. Most of them went into the old tulip gardens which have pretty poor sandy soil. I started last year but did not have enough worm compost to put in the whole thing and again this year I still didn’t have enough, but for the beans I plant in there every little bit helps. The contrast between the worm compost and the soil of the gardens is still easily seen.

I have two pictures, one shot of one of the whole trenches I put the worms in and a closer picture of the end. I think they’re so cute. :) 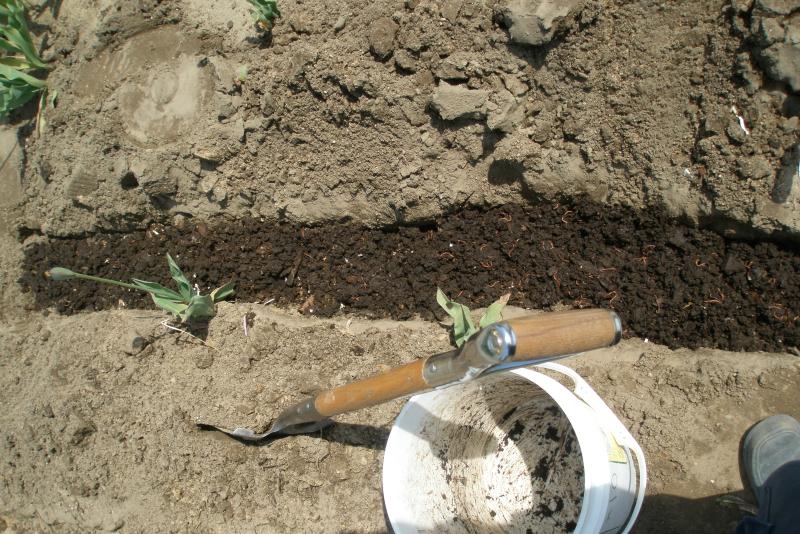 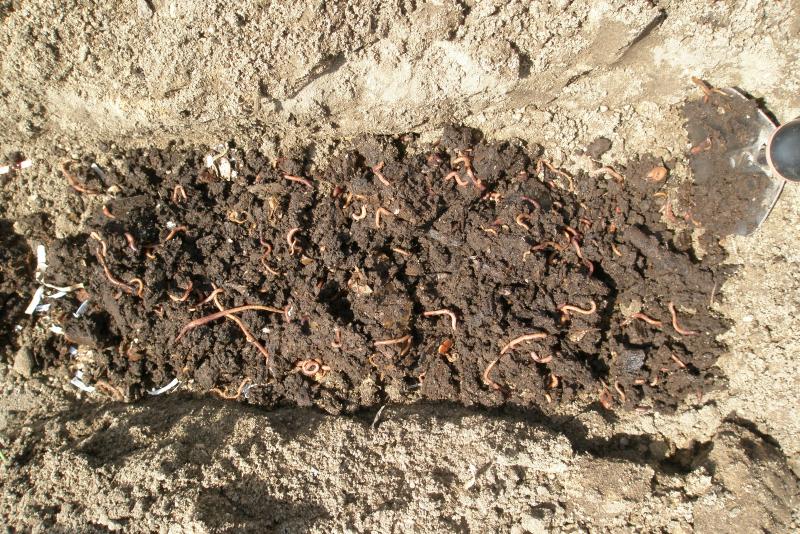 I decided when restarting the buckets back up to get them going for next year that I would make it an even 12 buckets.