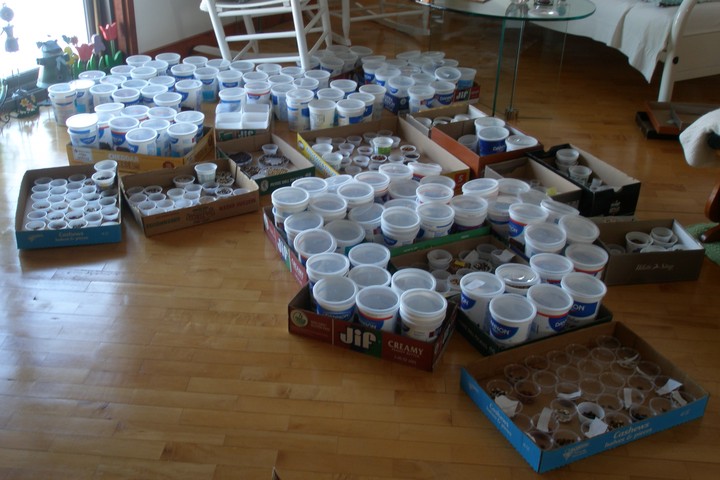 Winnowing Down the Collection

This project page is not about general bean history - that topic is covered in other places on the internet. Instead this page is about my own history of growing beans and mostly about what I’ve been growing each year since about 2010.

As of this edit (April 21, 2022), I’m still reorganizing and rewriting this project page. You probably want the other bean page instead which is at: Anthive Beans as it doesn’t have as many lists and nitpicky details. Much of the information on this page is repeated on that page.

Detailed record keeping was not needed at first. I didn’t know I was going to be growing so many beans. Now with so many varieties and projects I need to consolidate my records into one location - this is it.

Part of what I am working on now is searching through old e-mail messages and other writings (garden journals from websites and usenet posts) to see what mentions of beans I’ve grown and also through messages about trades with other people - it is slow going for me and not likely to be done anytime soon but when I do get time and the energy for this sort of work any details will get added to this page.

You might find references to beans that I no longer grow. Why bother keeping track of them? Sometimes they’ve been inspirations or sources of possible outcrosses. Also as I am now winnowing down my collection it is also important to have some recollection of what I’ve seen and when that was.

To start out I picked up packets from the seed racks at the stores of Tendergreen green beans, Top Notch wax beans and Hendersons Bush Lima beans. That was the start.

A more highly edited and amended version of what is on the other bean page (just in case someone shows up here first and is determined enough to read through all of this I do want to provide some context).

2010 the time I was growing wax beans, green beans, some soy beans for making soy milk and bush lima beans. The bush type green beans would sometimes grow a long climber so that was probably a reversion to a parental type or an outcross.

Then I started looking into how many varieties there were and wanted to grow some dry beans like the Pinto, Kidney and some bigger lima beans. A simple way to get more was to go to the store and buy a bag of bean soup mix. Then my list expanded from the initial three to sixteen which I planted in the North Garden (the same year I was getting rid of the horsetail and renovating along that edge for water flows so the garden was a mess to look at). Most did well, except the large lima beans, Lentils, Chick Peas and Blackeye Peas.

The harvest from that garden had some of the most beautiful things I had ever seen. Yes, I was hooked, completely. 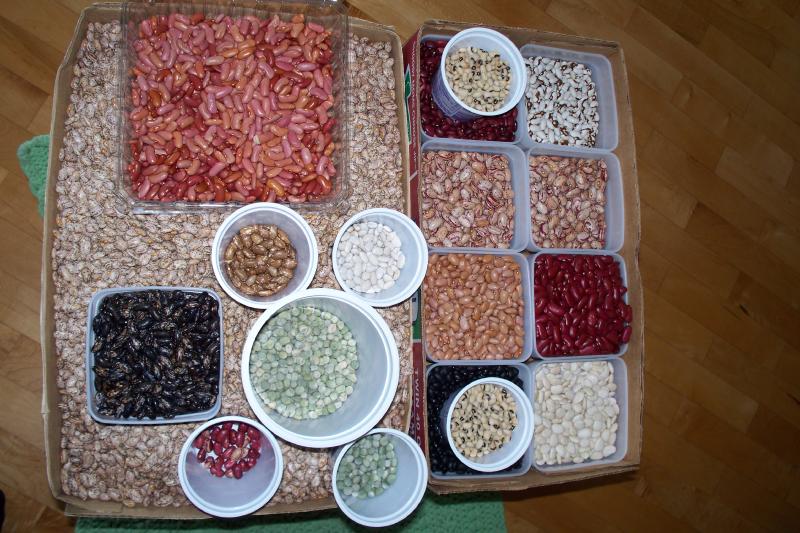 I also purchased or traded with a few people for more varieties increasing my bean collection to about 40 beans.

With all of these varieties growing and being open-pollenated by bees (the small bumblebees are the most common bees seen in the beans) some crossbreeds started showing up. I no longer keep track of how many beans or crosses I have, but some of them I have replanted and gotten them stable enough to give names.

2016 was a year when I only planted a few varieties. Most of my garden space was taken up by squash and I knew I didn’t have enough room for much else.

The 2017 growing season started off fairly well with most beans sprouting that I planted. The only challenge was to get the Edamame Soybeans to survive sprouting stage. The chipmunks were eating them as fast as they sprouted - I only had three plants growing out of three hundred seeds planted. Some years nature gets a fair share earlier than I’d like. All together I planted over 50 varieties.

During and after planting I was trying to sort and combine containers to get the bean seed collection to take up less space - with few rainy days I’d not finished, but I took a picture to show a version of the madness… The bigger containers on the shelves were the beans I had enough to eat. Many of the smaller containers had collections of similar varieties which weren’t yet sorted out. 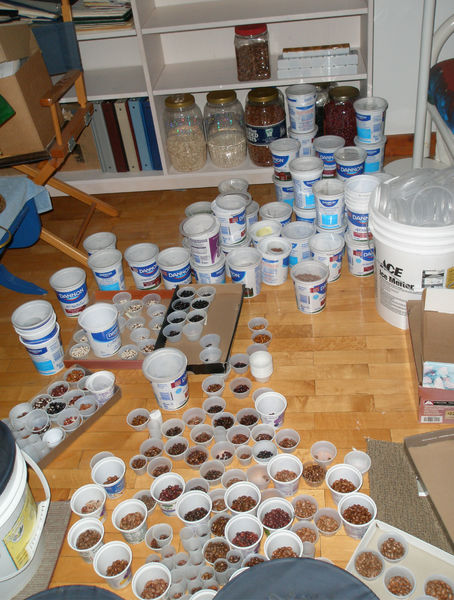 Some of the first dry beans of the 2017 season. The colors didn’t show up as well in this picture as I’d’ve liked. 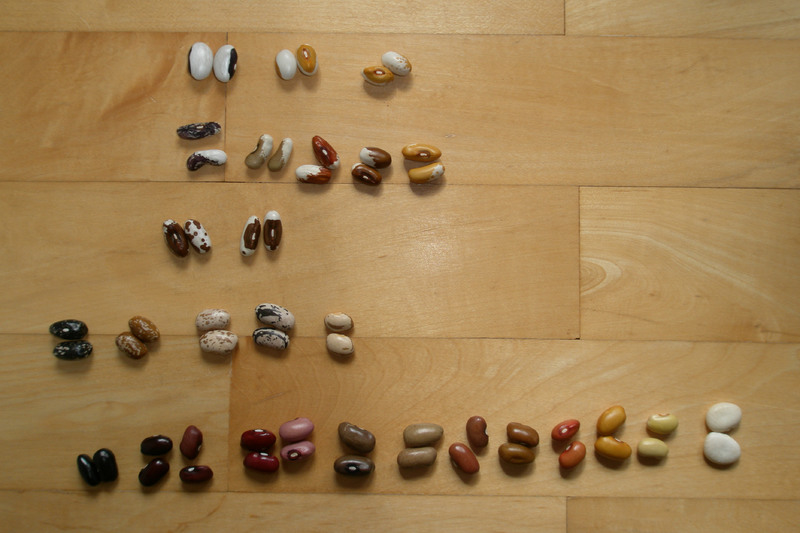 This bean had been around for several years and I finally grew it enough times that it was stable enough to get a name. 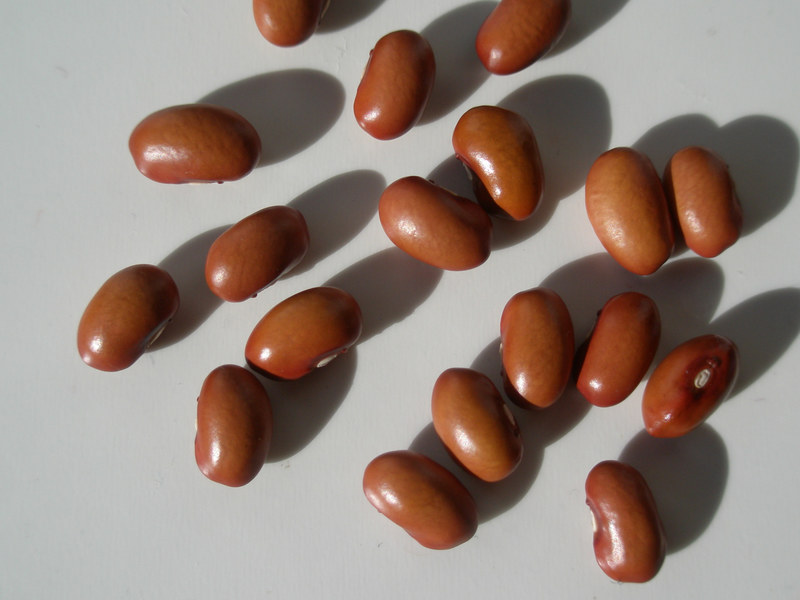 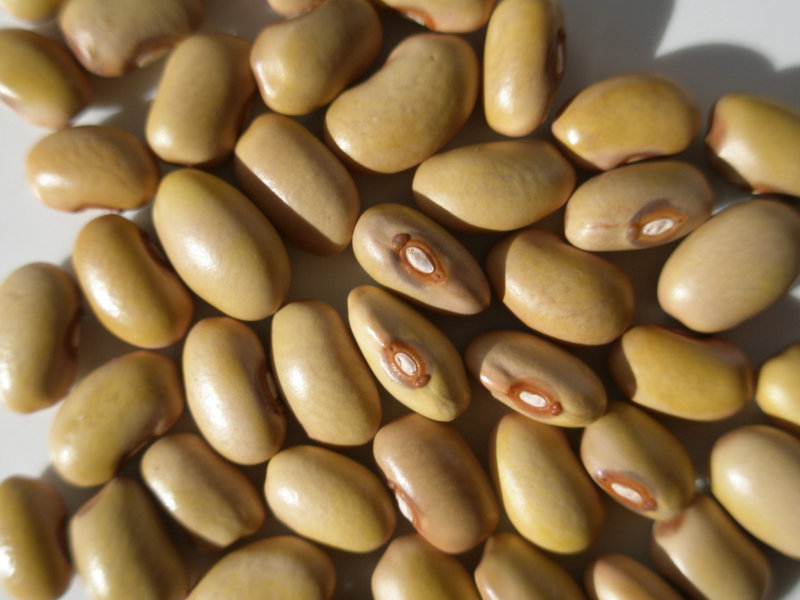 Sadly this was a bean that did not stablize. 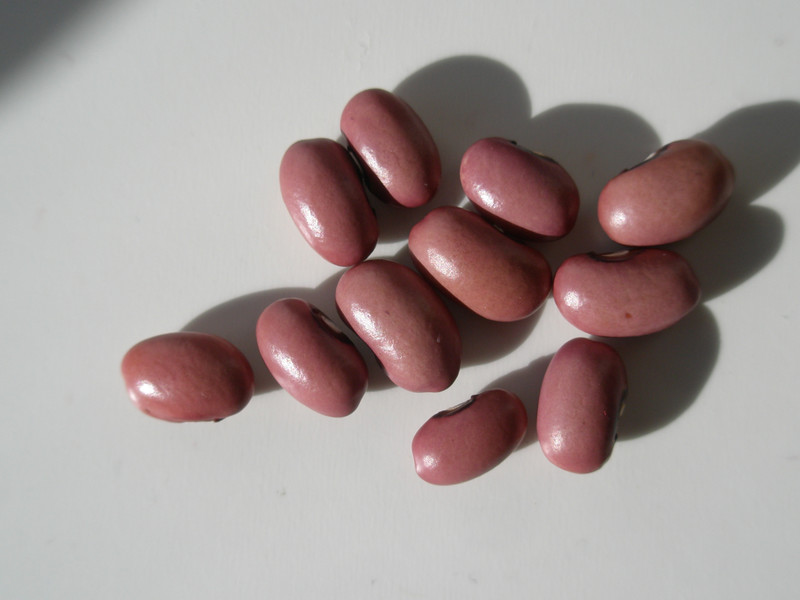 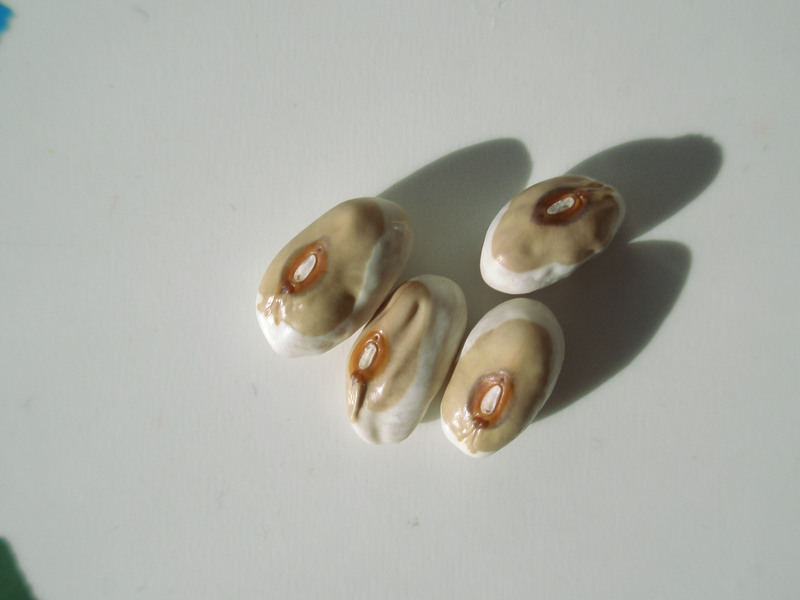 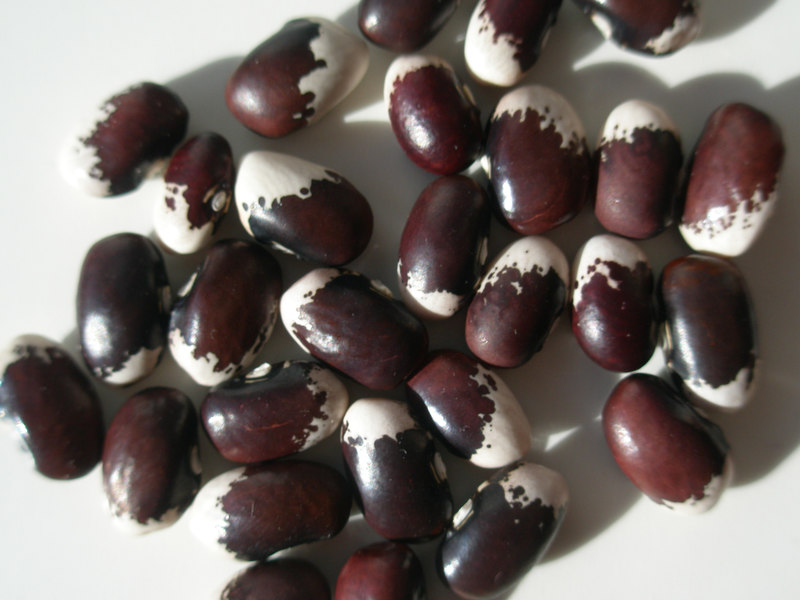 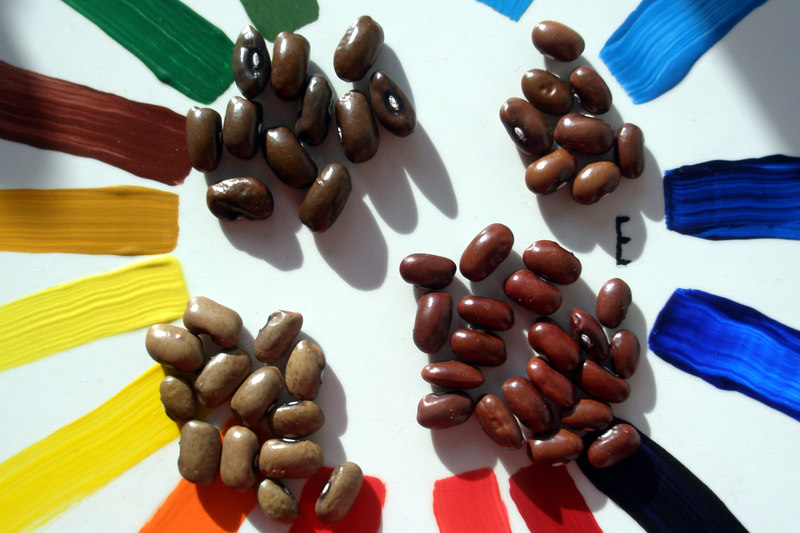 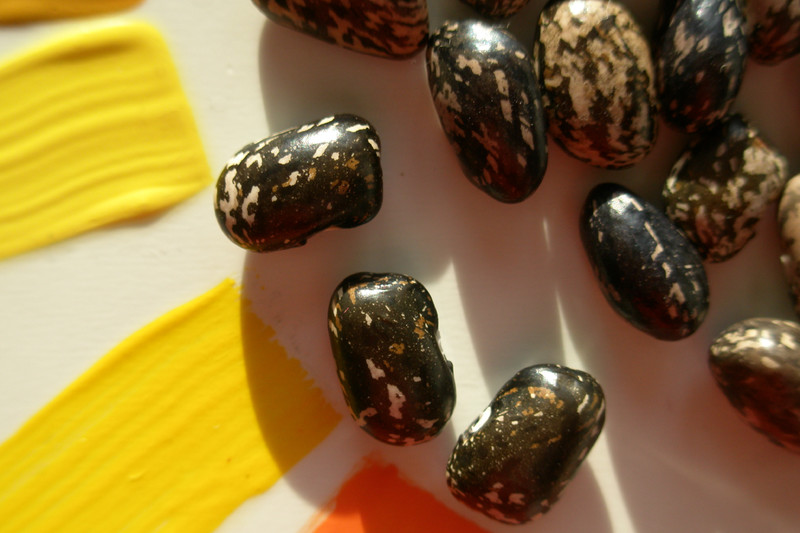 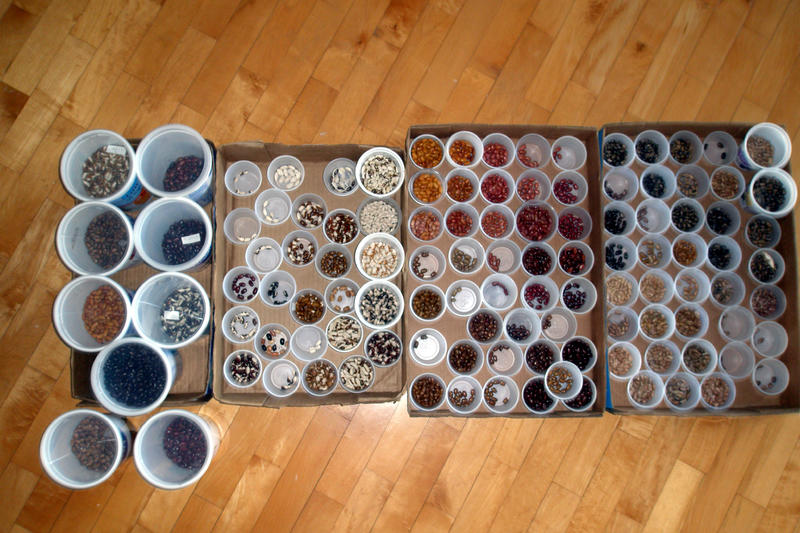 A new cross. Likely parents are the Tan Goats Eye beans I have grown for several years and either the Pink Tip or the various other derivations from the Yellow Eye beans (also known as Molasses Face). This bean made me so happy to see. Lemon Slice did become stable enough to keep the name and I do still grow it but it will not keep the light background unless put into cold storage (similar to how Cranberry or Horticultural beans will fade to more brown color in time). 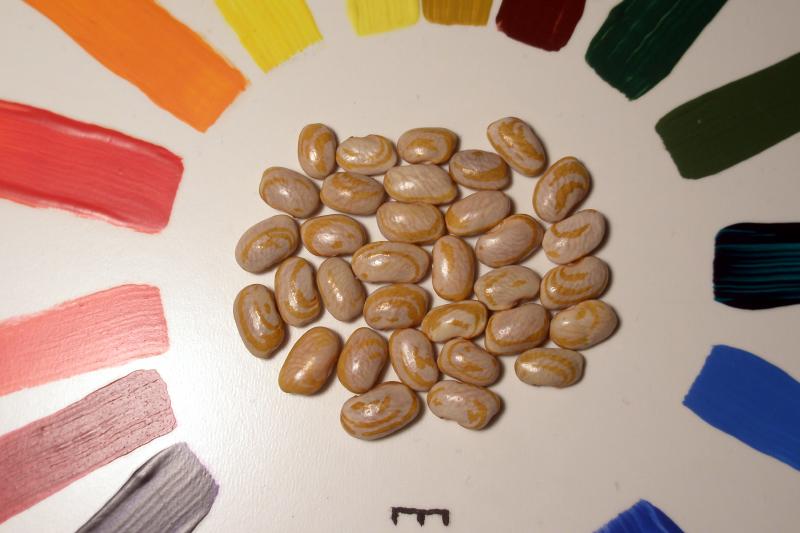 A selection of beans from what was grown the 2018 season showing how easy it is to shift the shape of a bean within a few years time by selecting what you are after from crosses that show up. These are likely from a cross between Money and Appaloosa beans. 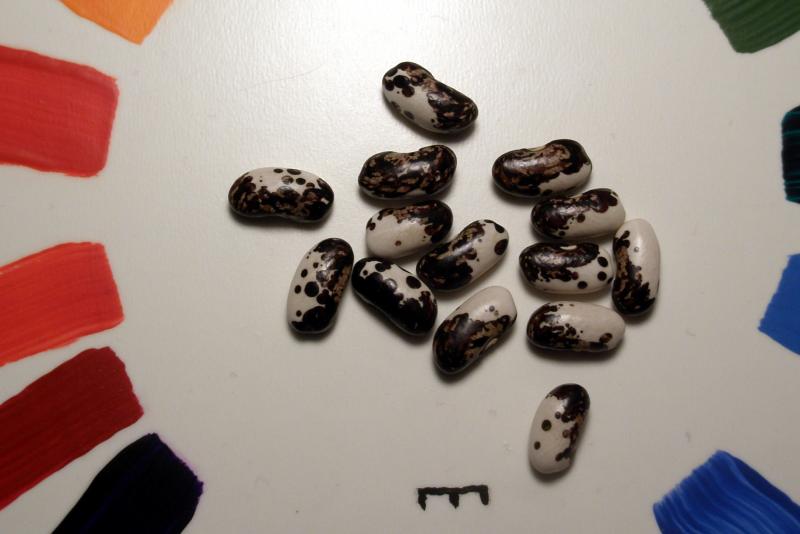 Eleven groups of four each from the half beans. I do not have the yellow ones in this picture so there are more I have grown in my collection. You may not be able to see it easily, but each group is a different color from the others. 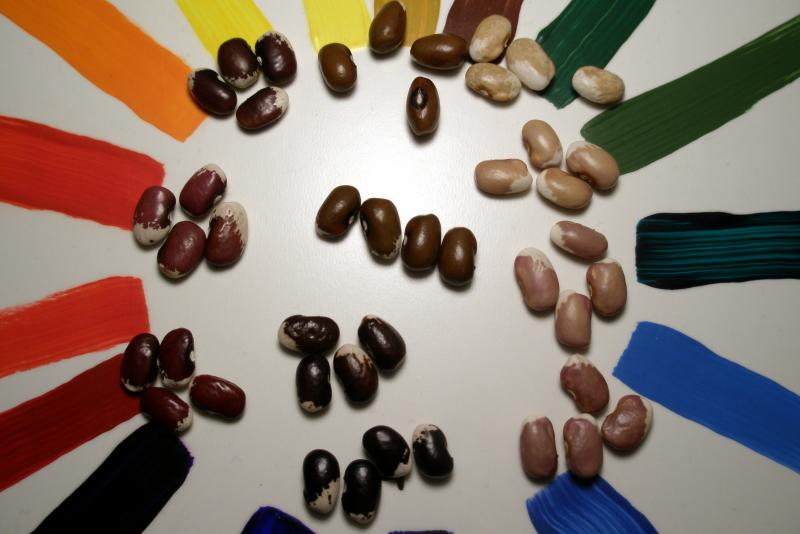 Another of the crosses that has shown up the past few years. I call it Yed because of the combination of yellow and red. What is so distinctive about these beans is the splotchy patterns they make. 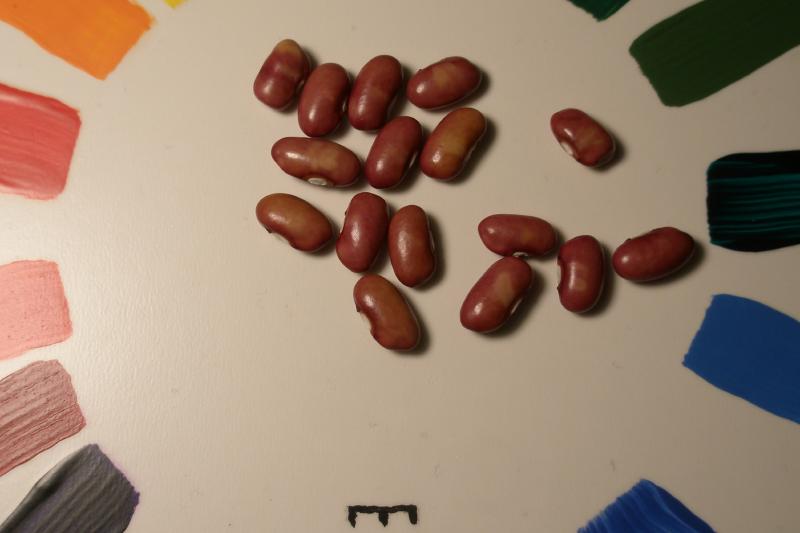 Getting ready to go to a seed swap - how to decide what to take? 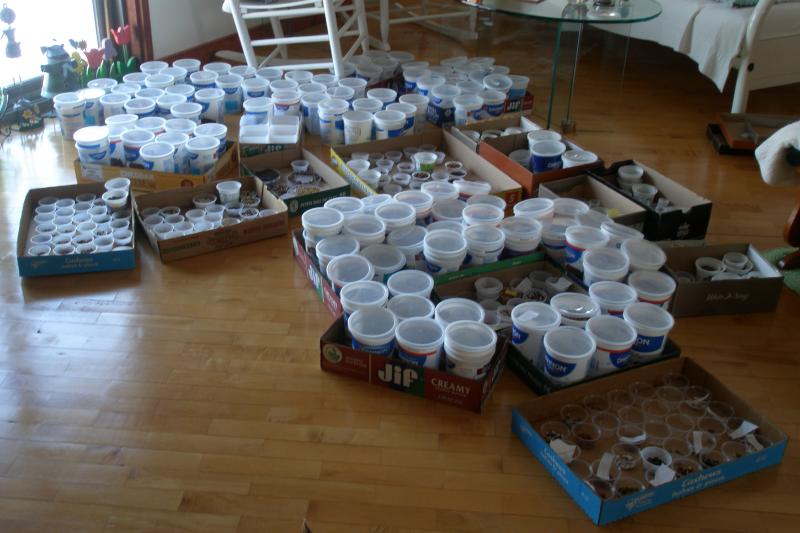 Finally finished up the sorting and winnowing of beans down to a more reasonable number of future samples. I still have way too many brown beans. 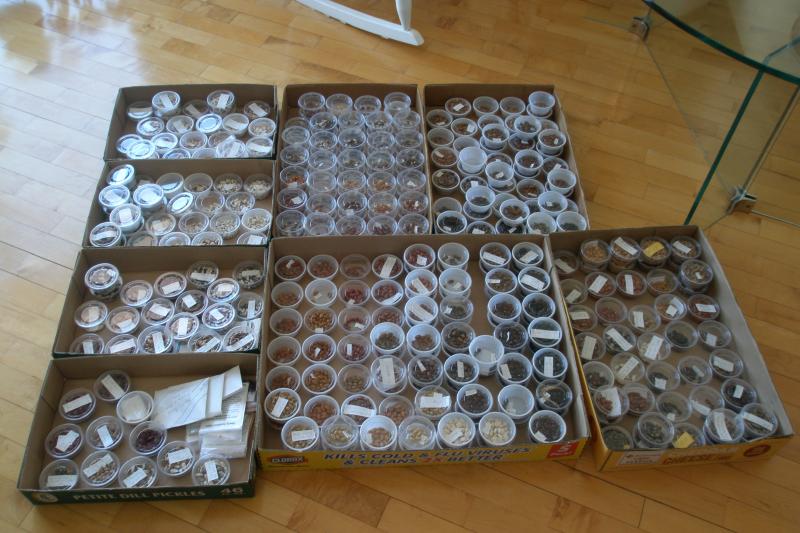 The 2020 season was pretty hot and dry the early summer. The beans were coming along but not doing as well as they would if we’d had a few more rains. 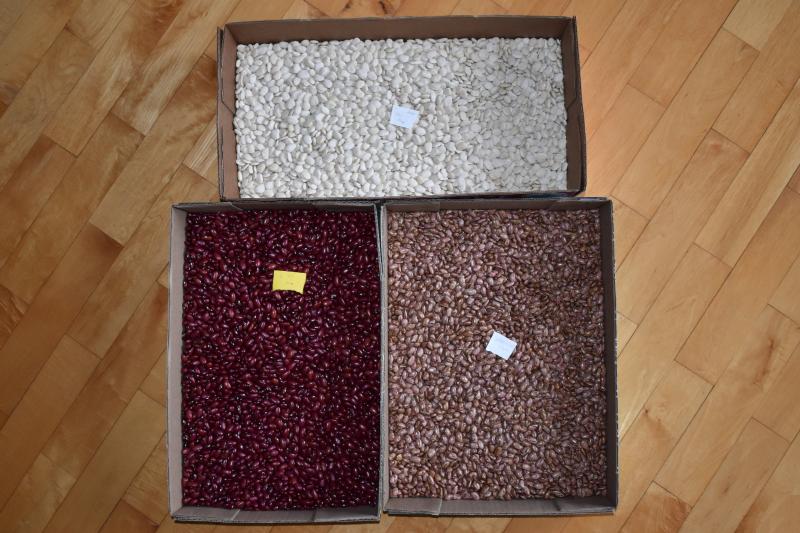 The beans in packages from the 2020 growing season, or at least most of them. 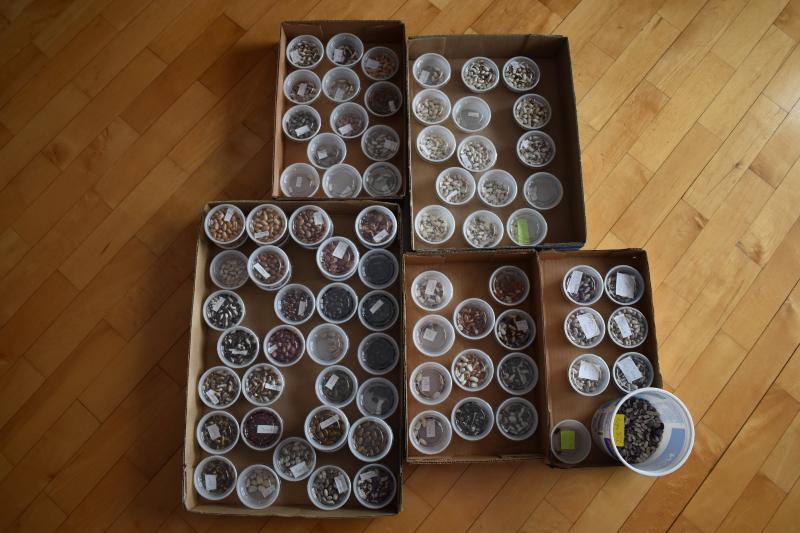 The earliest 2021 beans were up and growing with only a few failures in germination that I could tell. I thought the Fort Portal Jade were going to give up but they barely hung on through the whole summer. The neighboring Purple Dove beans were planted a week later and reached triple the size of the FPJs. You could barely see the FPJs behind the PDs, but they were there next to the peas. 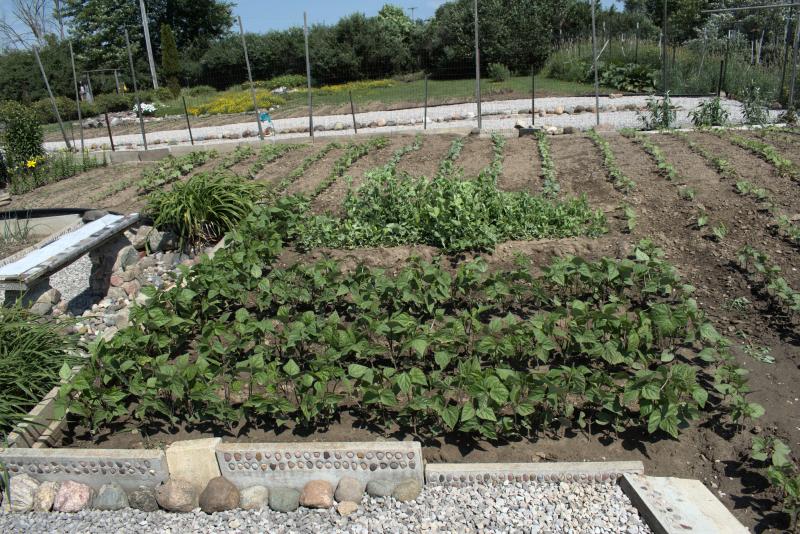 A mix of various colors of beans. 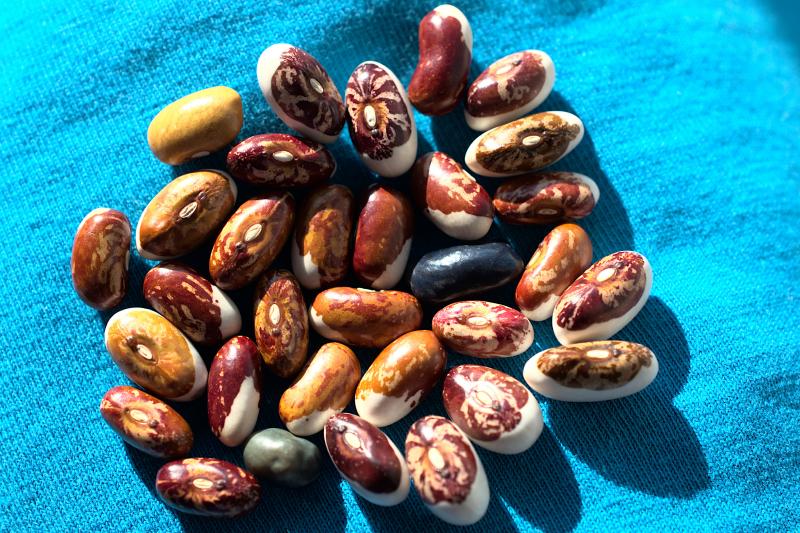 These are requests and bonus beans combined so not all may have been returned.

I am still working on my coding system.

Some abbreviations used for sources:

My first season growing the Tendergreen beans I had one outcross where it looked like a Pinto was involved - it was an easier bean to shell and lighter in color. I also had some white beans show up which were a semi-runner - the pods were still edible, white seeded beans - I only grew them one more year. I kept the easier shelling beans and grew them a few times but have not grown them often enough to keep them going. There were too many other more interesting beans to explore.

In going back through old records I’m trying to find out exact mentions of sources and when I first obtained various beans. In some cases it has raised more questions than it has answered so I’ll put down my questions here too. This is primarily only for historical reasons as in most cases I no longer grow these any more anyways, but I do want a complete record as best I can provide just for my own memory if I later find out something which helps me resolve the questions.

From what I can remember and find in searching records I grew almost all of the above beans in 2012. The ones I did not grow were any that I had newer replacements from the Vermont Bean Company so I did not grow my previously acquired Black Turtle, Borlotti, Red, Light Red Kidney and Dark Red Kidney and I also did not grow Calypso or the Black Eyed Peas.

Traded with ML to obtain Improved Commodore sourced from American Seed Co in 2008, three others were also from ML who got them from “a lady in Wisconsin” in 2008: Black Turtle Beans, Kidney (Dark Red), Pinto beans. All of these were pretty generic beans of their type.

Most of what I grew for the next few years were mixes of the above. I was often working on selections from Peregion (which I consider a blend). Eventually I would get several good crosses from Peregion to work with more (Reddish Pere in my early records eventually ended up being called Huey).

When did I get Greasy, Jumbo, Yellow Eye, Pink Tip?

More about Sunset, Lemon Slice, Huey, Monster, and others. I need to get the other page finished first.

THE OTHER BEAN PAGE:

If you made it this far you are a very dedicated reader or a big fan of beans. My other bean page is more narrative and pictures of beans that I’ve grown: Anthive Beans