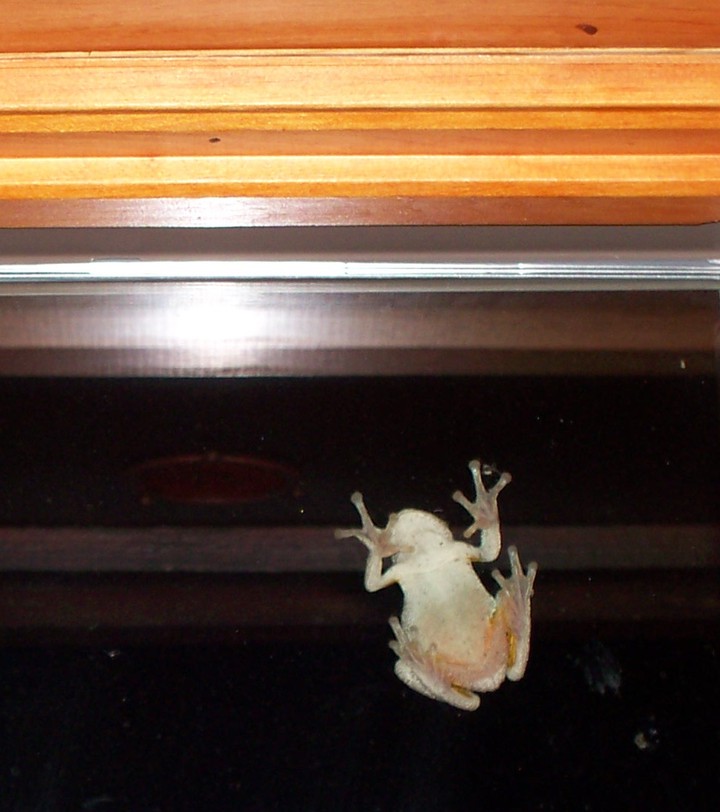 Sometimes they get curious about what goes on in here… 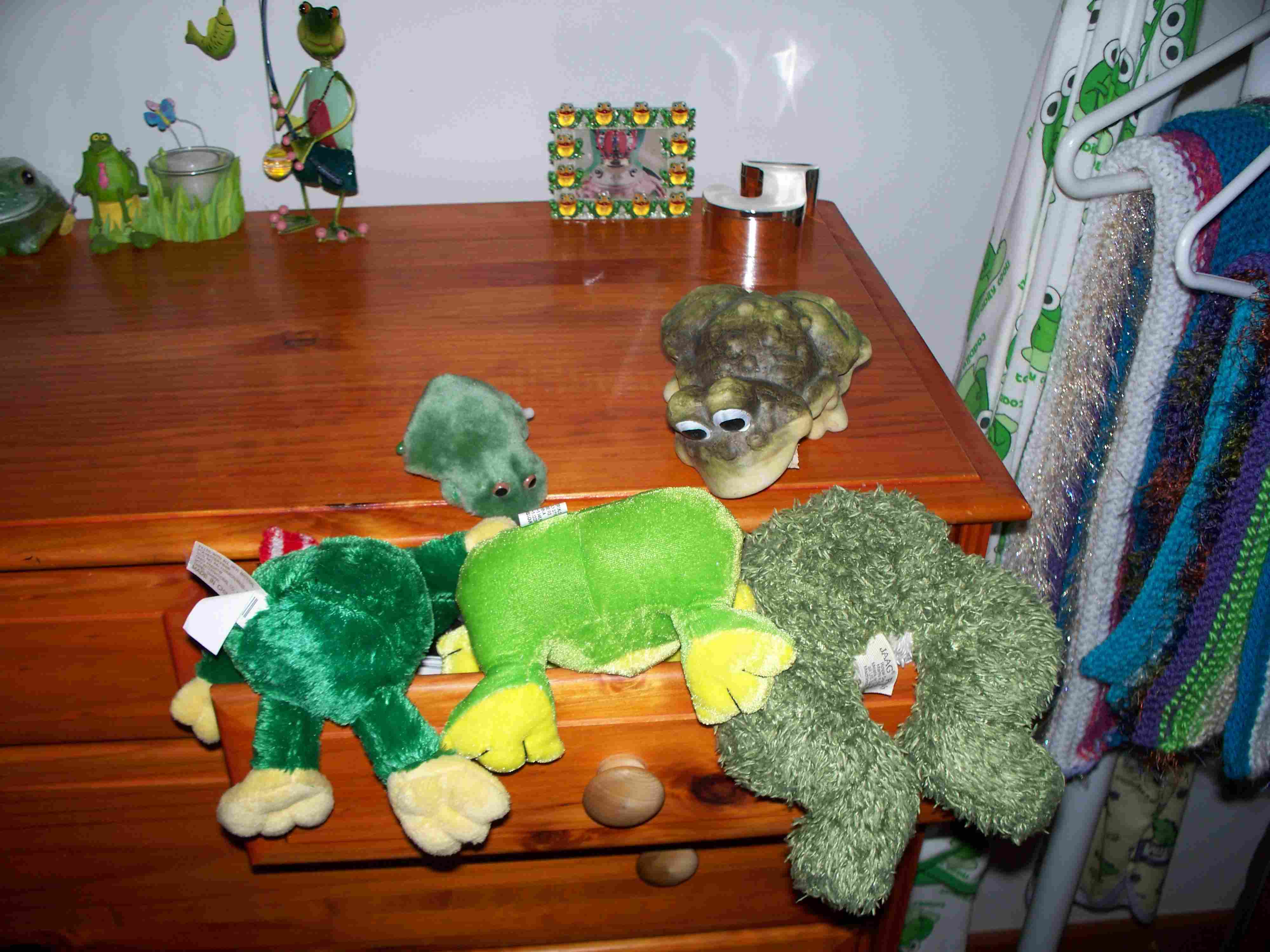 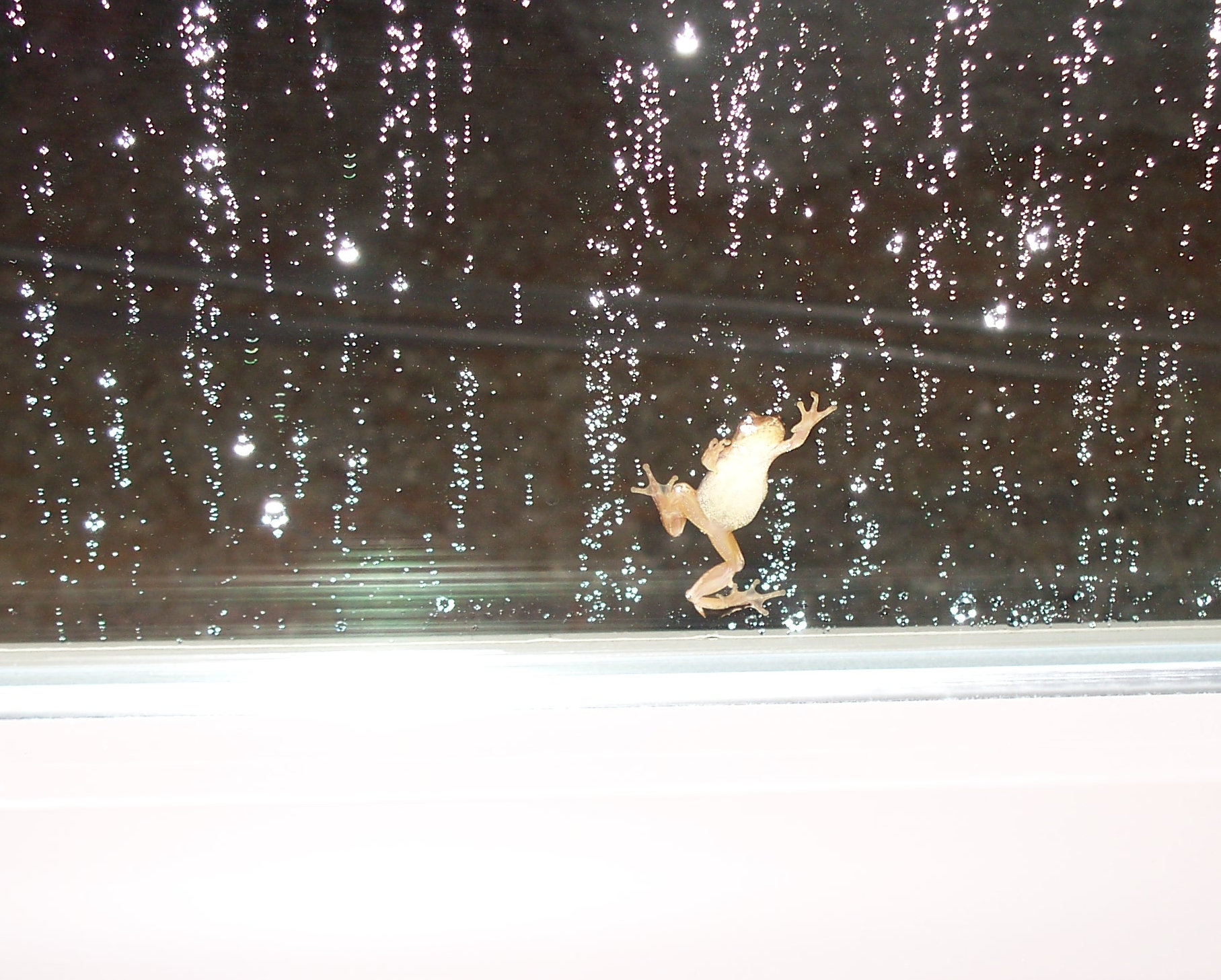 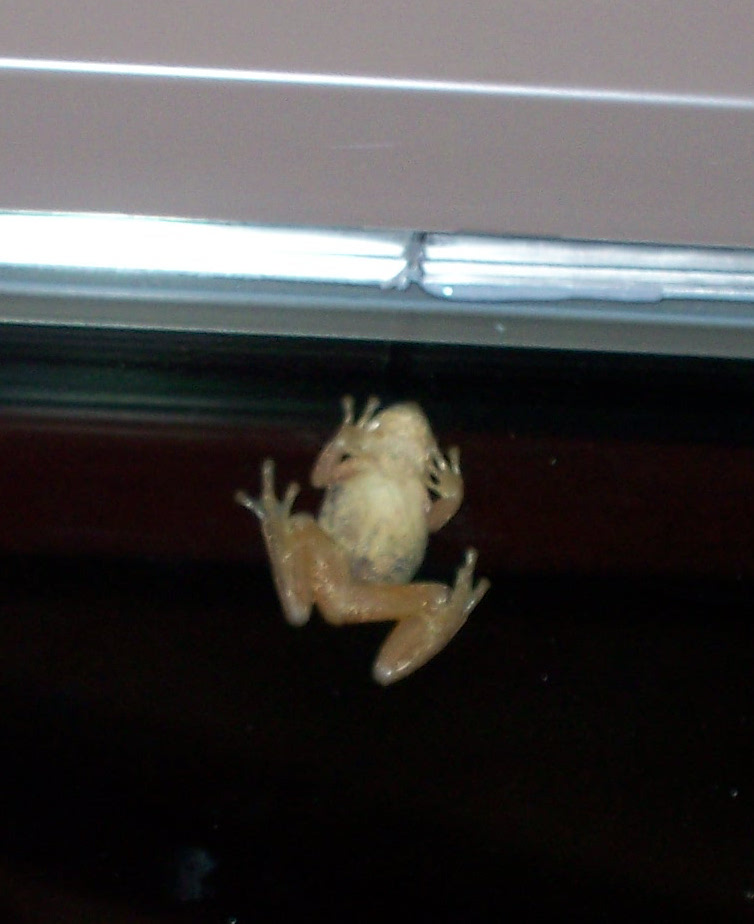 One time one waved hello… 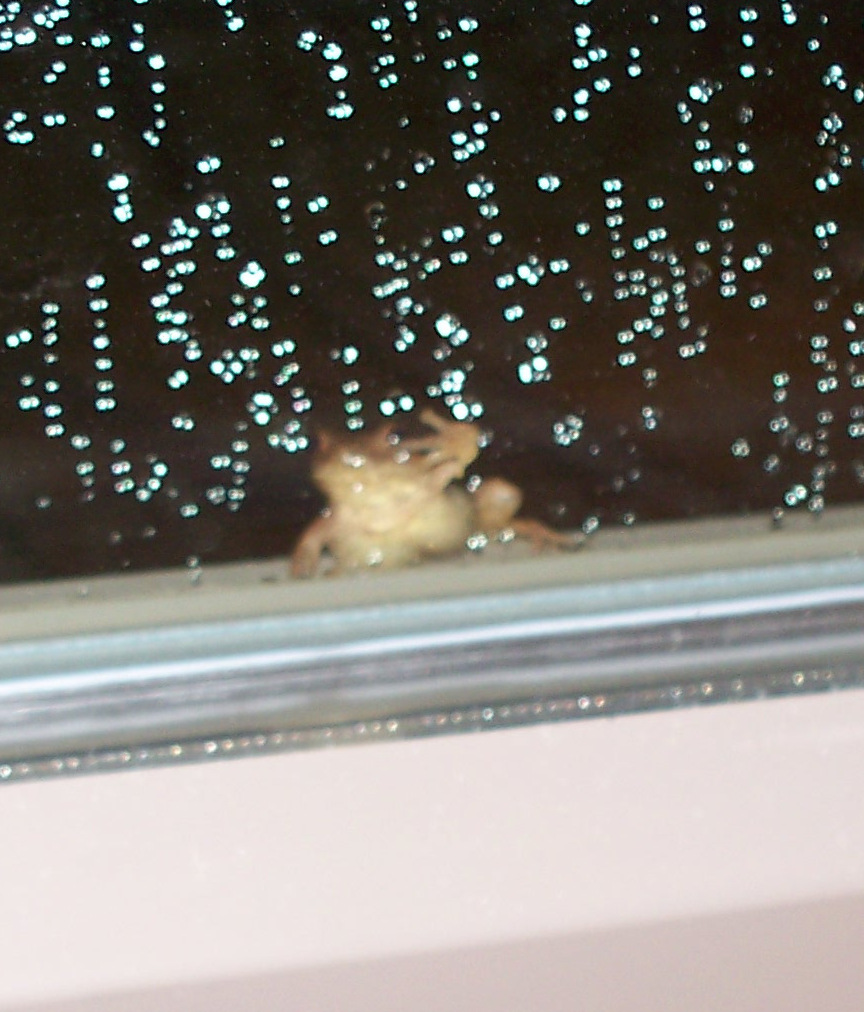 Other times they show up in unexpected places. Like on the 43°C roof, just hunkered down waiting for the evening when the cooler temperatures and bugs come along… 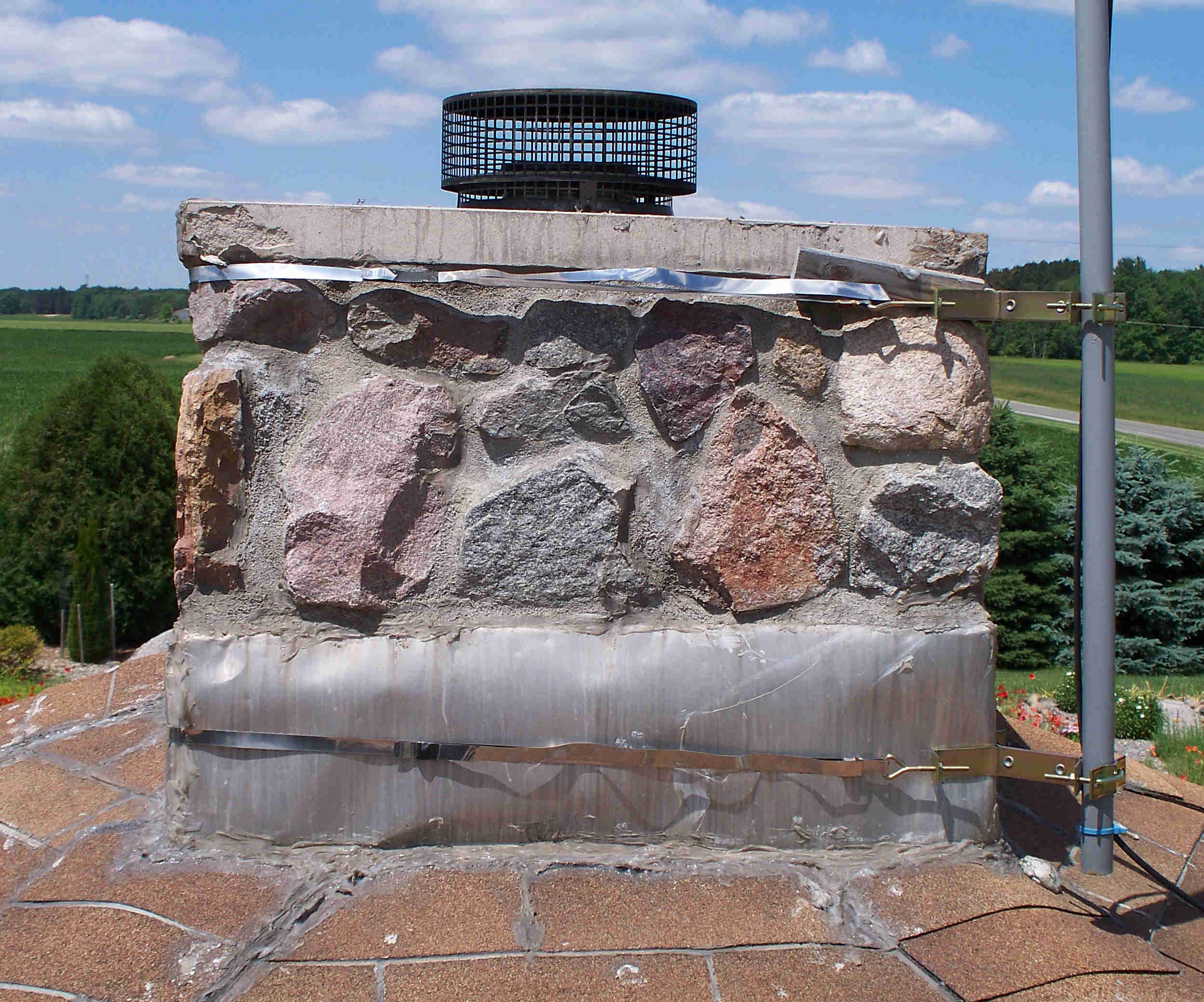 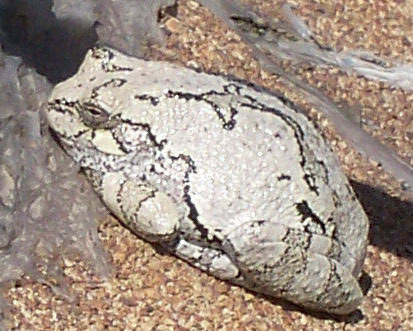 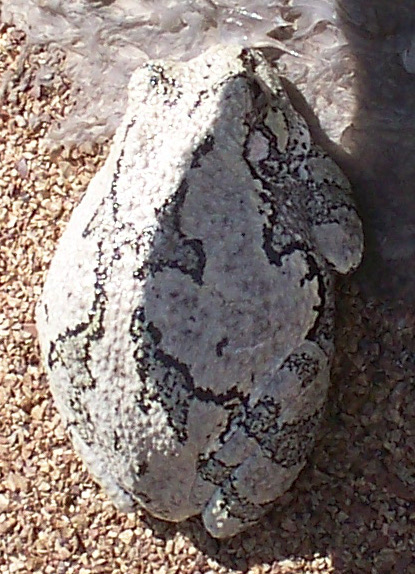 I really like the way that frog was camouflaged so well that at first I thought it was a blob of cement from the fireplace chimney. I happened to have my camera up there that day because I wanted pictures of the yard/gardens from a higher perspective than I usually have. Sometimes things work out well by coincidence.

This picture was pure chance as the frog was under the cover of the propane tank when Mom went out to check it to see where we were at on the level for the start of the heating season. The treefrogs will often come get the insects off the windows if I stay up late reading. 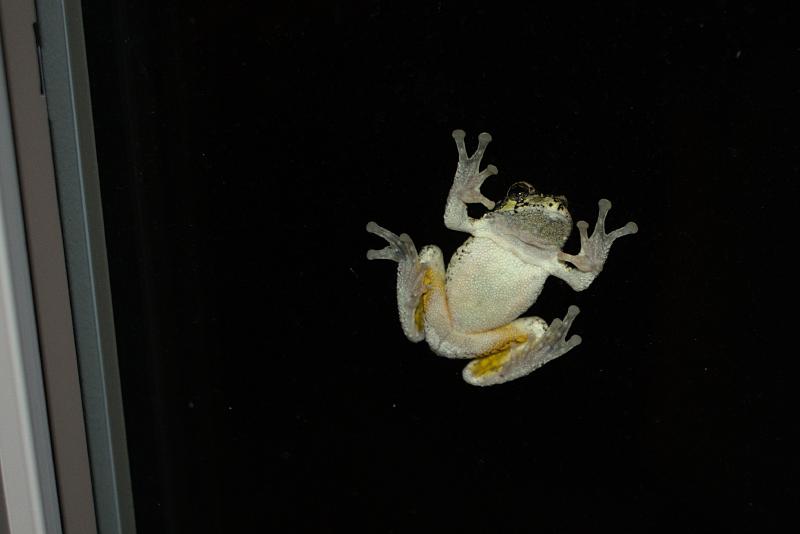 Another happenchance picture with a toad. It was hiding under a sheet that Mom had left out to dry draped over a chair. Some of the fabric was resting on the gravel and the toad decided that was a nice place to be. I went out and saw the fabric on the gravel and picked it up and there was the toad. I wasn’t planning on taking a picture but the toad was way too cute to not give it a try. I wondered if it would stick around long enough for me to come in and get the camera, yet it decided it liked where it was well enough to stay put. 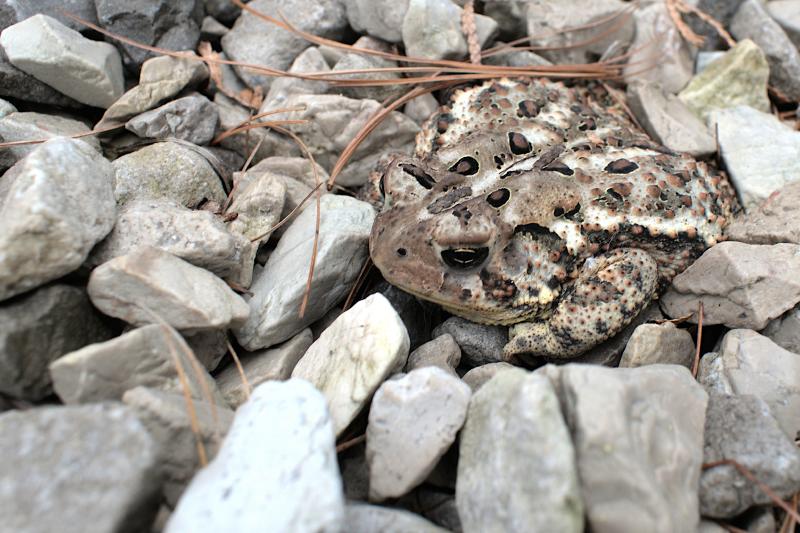 When we were first gardening here we were using some insect control chemicals and also some fertilizers. The frog and toad populations in our area have declined since the widespread use of mosquito control and I’m sure the many agricultural chemicals don’t help either. I wanted to encourage and help frogs and toads to return by trying to find other ways of gardening and keeping bugs from taking over. Three years later you can see the first tree frog who said hello to us [the picture at the top] on the front window (which is quite some distance from any garden or nearest tree). I’m sure it was after the bugs that were attracted by the light. I was so happy to see it I had to take a picture. A very healthy big frog it was too (about 10cm long) which made it interesting to see how it was holding onto the window with the toes splaying out.

There is still a lack of toads here, but we do try to make homes here or there for them in the gardens. But above you can see some of the other tree frogs that have come along on rainy/wet evenings to say hello (and eat bugs off the windows).

Ok, what did I do to help things out and encourage frogs and toads to return?

We have a diverse population of bugs and then also encourage birds to forage which seems to control almost everything. For example I hardly ever see aphids in large numbers. Not that it is perfect, I also accept that some insect damage to some fruits/plants will happen - that is just a part of the whole system, that everything deserves a fair share, even a bug or a frog…