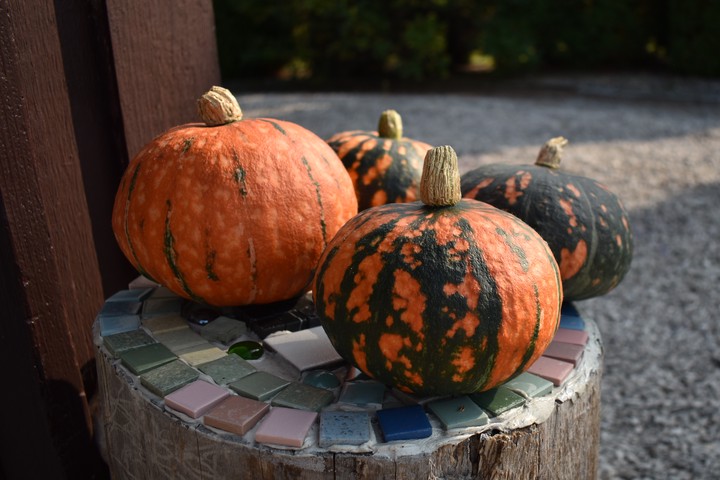 My first answer is what you like to eat and then what will survive your conditions. In our case with both squash bugs and squash borers we need pretty hardy varieties. Add in our heavy clay soils and variations in weather it can be a challenge to find squash that work for us. Did I mention powdery mildew and other blights?

Sweet Dumpling Squash did live up to it’s name but I am not a big fan of Acorn type squash so I will not be growing it again. For those who do like Acorn type squashes and want even sweeter ones these will do.

I’ve been growing various squash here for about fifteen years and by far my favorites have been the Buttercup and Kabocha type squashes. Somewhere in there someone in the neighborhood must have been growing pumpkins and the orange started to show up in the fruits as they ripened. We found out that it was ok and that the squash were still edible so I did not try to get rid of those seeds and so we keep replanting them each season. As time has gone on I’ve found that the orange colored squash do not store as long or as well as the green kinds and a few others like the Buttercups will do better too. However, I’ve not been able to keep the Buttercup squash growing here so I’ll still keep working with these and see where they go from here.

In 2021 a large squash appeared unlike any other squash we’ve grown before. We didn’t know if it was even going to be edible but it turned out to be a very good eating squash and I will be working on them further to see if they are stable and to select out the trait of some squash to have ribs in them (shown below). I will have to come up with a name for it if it ever shows itself to be stable enough. 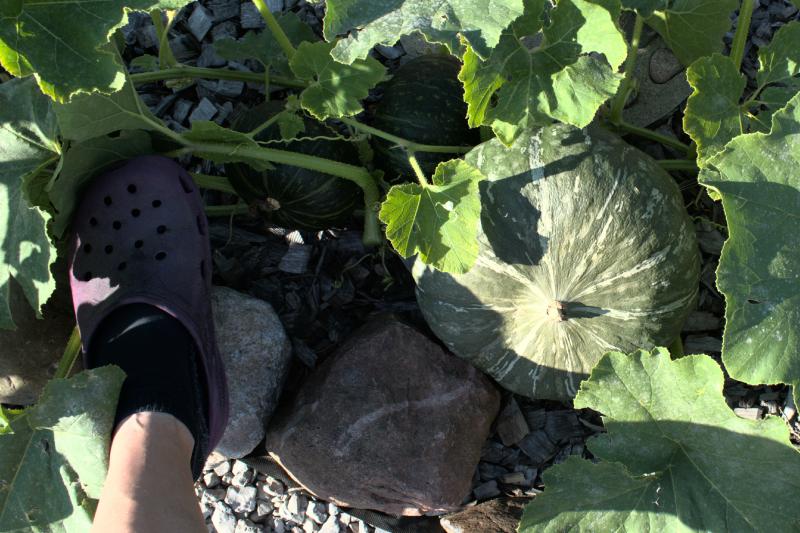 The other project I’m planning for next season will be to get the naked seeded squash to cross with something else that will give a more edible flesh result. The current hulless seeded squash flesh is pretty much tasteless and not very good texture either for eating so any other squash I can get it to cross with will likely be some kind of improvement. In the meantime any naked seeds are very good roasting and eating so it would be great to have the squash all have these types of seeds instead of those hard hulls to deal with.

This is how I save seeds from squash that doesn’t involve using water or fermenting them. When removing the pulp and seeds from the squash I set it aside and then after I’ve got the squash taken care of I will separate the squash seeds from the pulp by squeezing them or picking them from the pulp. Then I put them on a tray to dry. We have forced air heating here so in the winter when I’m processing the squash there is usually enough dry air flowing to dry the seeds off within a day or two well enough that they won’t spoil or grow mold. As they are drying I will move them around with my hand to make sure they’re not sticking to the tray or to each other. I then leave the seeds for a longer period of time to dry further so that the seeds can eventually be put into storage containers. The little bit of pulp left on the seed will not harm anything and they can be planted just like this if you want but most people if you give them seeds with pulp on them might think that’s not right so the next step is to just rub that bit of pulp off after the seeds are fully dried. 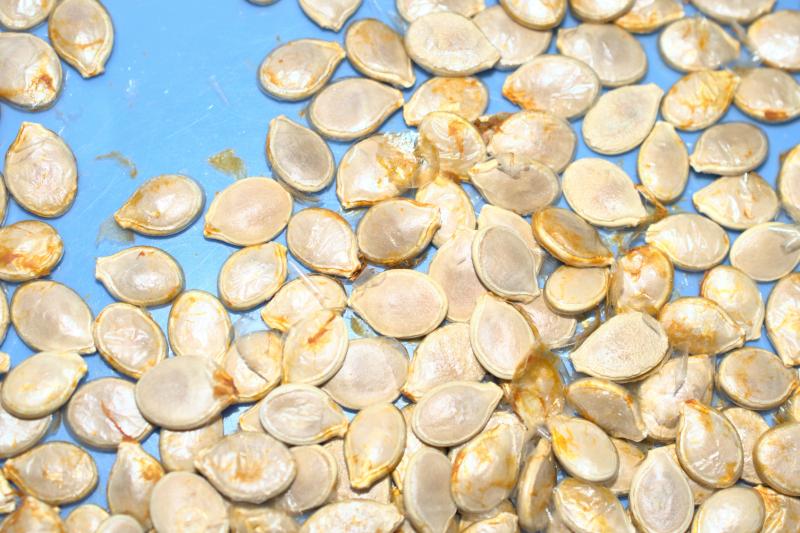 You can see how nice these larger seeds are and that they’ve dried down enough and had most of the pulp rubbed off. 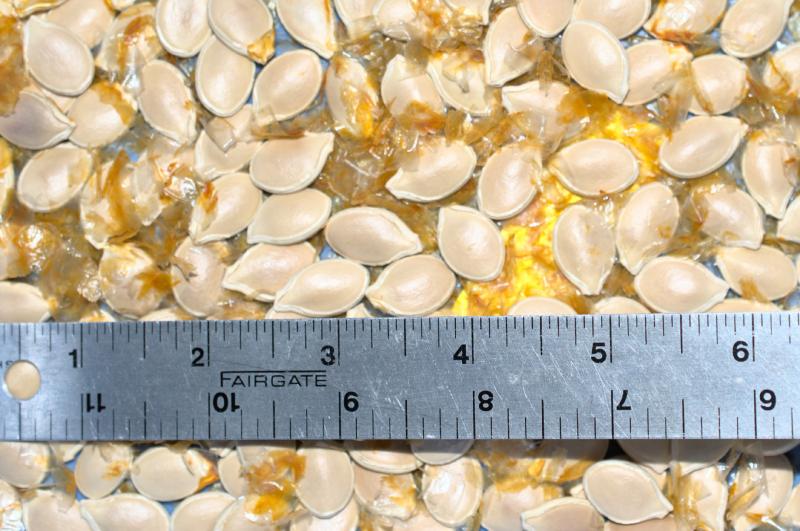 When sorting through the dried seeds and removing them from the pulp I also try to remove any seeds that aren’t viable. Some seeds are easier to deal with than others. The naked seeded ones are by far the easiest as you can see them directly. Others you can sometimes feel that they are soft and not full of a seed and others sometimes I can tell they’re hollow by how they sound by dropping them on a thin plastic tray or piece of cardboard. Another thing is that they may bounce or blow further depending upon how you drop them or if you have a small fan and don’t mind doing that. I usually use a mix of pinching them to see if they give too much, dropping them and a few I find because they’ve bounced too far or they sound light when compared to the other seeds I’ve been dropping or they stick to my hand too easily. I know there are other ways to do this too from weighing to using water to float seeds but I’m trying to use techniques which do not involve too much technology or the use of extra water.

And as an obvious thing to point out but I can’t help it - all the squash pulp, cooked skins, seed chaff and seeds that aren’t viable do make excellent worm food.

The squash harvest 2021 on the table in the garage. We just don’t have that great of storage space here and it tells later on in the fall and early winter when I’m trying to get squash processed and put up before it can freeze or spoil. 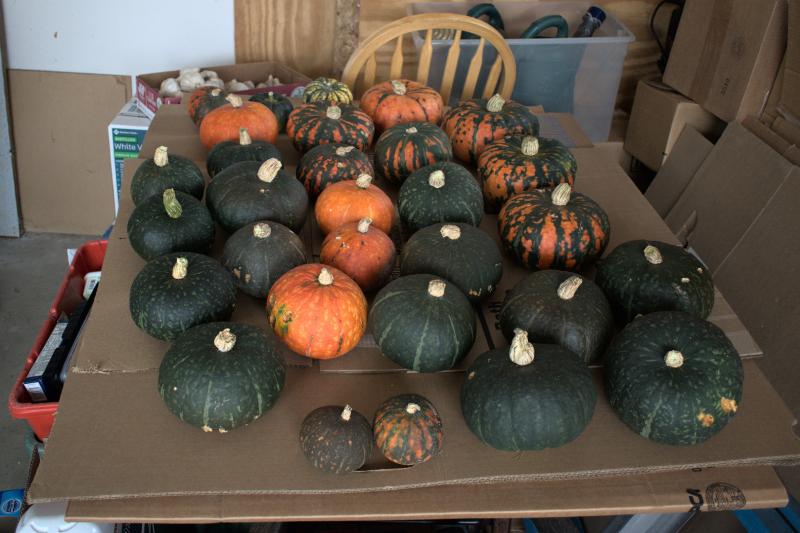 Squash harvest 2021 on the floor in front of the table. Now you can really see how big those squash were in comparison to the others. 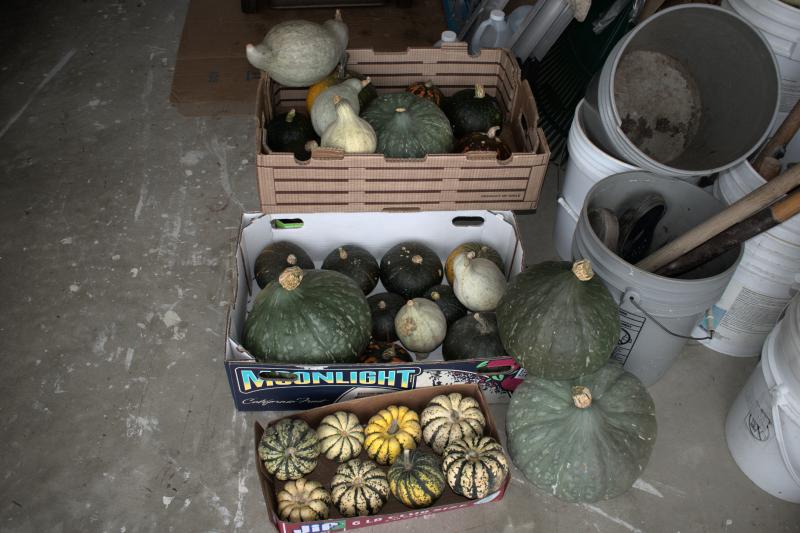 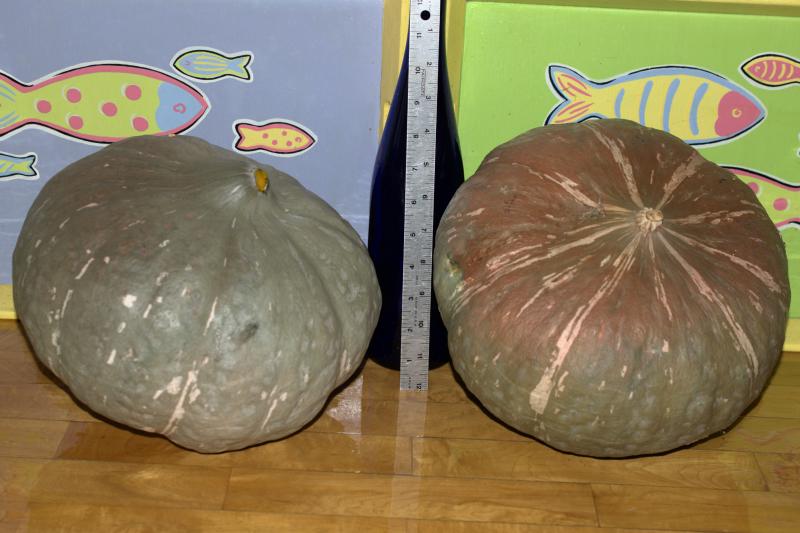 The inside of these new squash are pretty good quality with plenty of meat. I also like that the pulp is on the dry side and more stringy making the seeds easier to separate and dry. The seeds are large and that is yet another good trait. 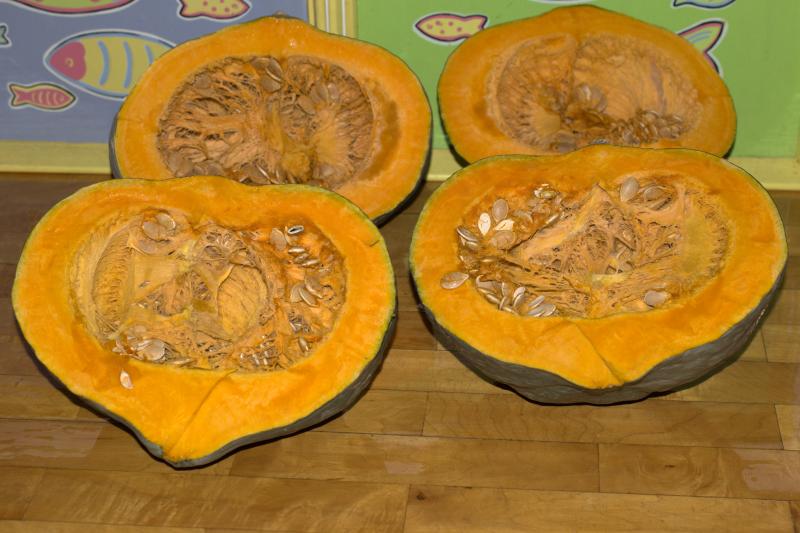 One squash had very prominent ribs which I do not want to appear in the future so I will only use these seeds in an emergency if the rest (from a previous batch that did not have any ribs at all) don’t produce useful results. The ribs were not through the whole depth of the flesh and were not all stringy or hard but bits of them were not what you’d want to eat. Once cooked the ribs were easily removed from the rest of the squash, but I for sure would rather not have anything like that in there to begin with. I’m glad that this wasn’t a feature common to all of the new squash to begin with - I think I have a good chance of avoiding it in the whole seed line. 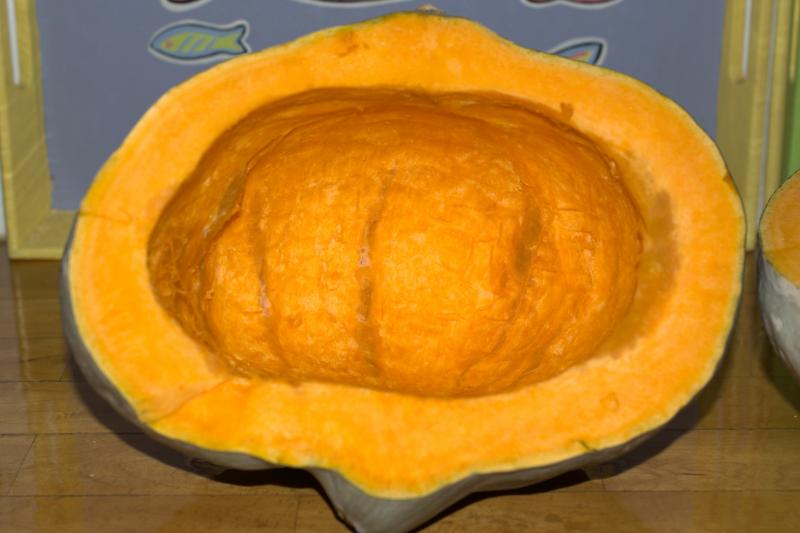 The orange squash we grow is good eating, but it does not store as well as the green squash or the others. Luckily I was able to rescue some of one squash and most of the other, but normally I wouldn’t even risk it. I do have a good nose so I can tell if rot has gone too far into a squash and will discard the whole thing instead of risking it ruining a batch of baked squash. 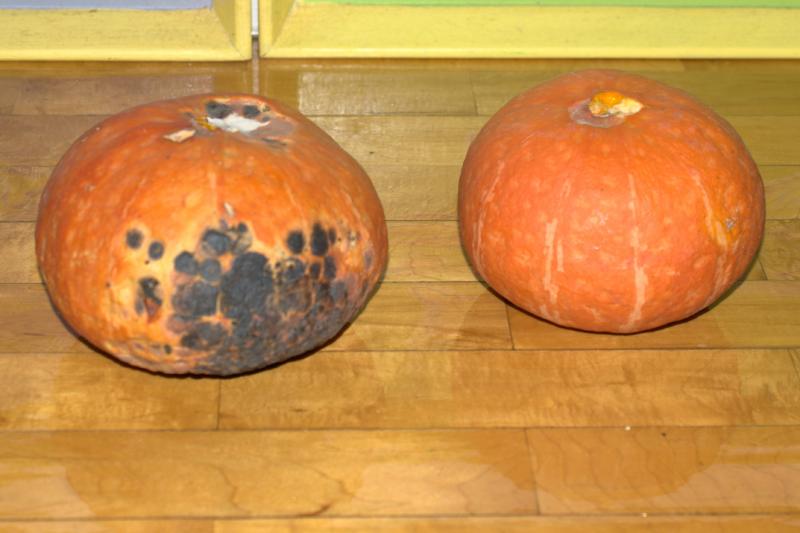 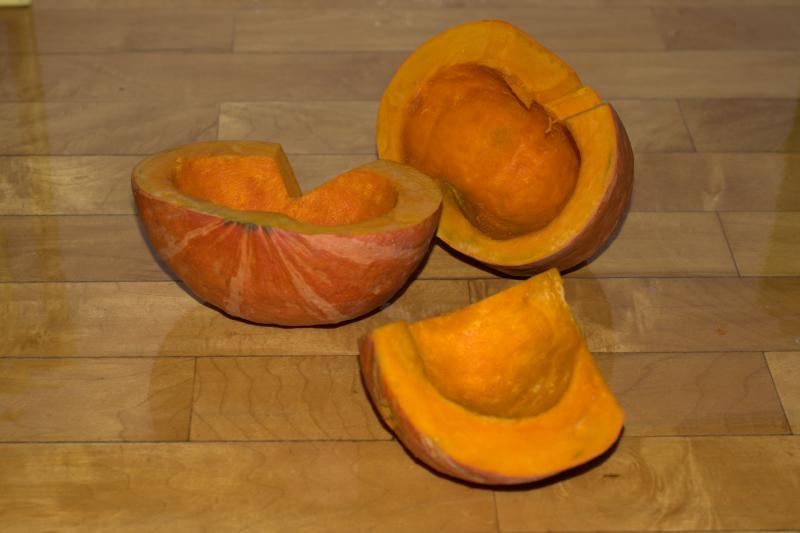 The orange and green squash are somewhat better keeping squash but still not as good as the greens. 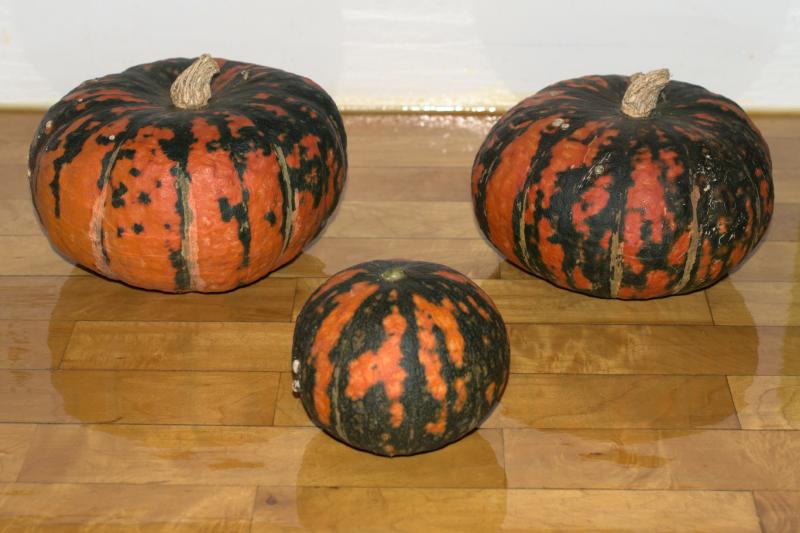 It does produce well here though so I will keep on growing it. I did end up discarding the smaller squash of the three - there wasn’t just much to it plus it smelled somewhat off - I don’t think it was fully ripe or cured when picked. You can see the other two were nice and full. 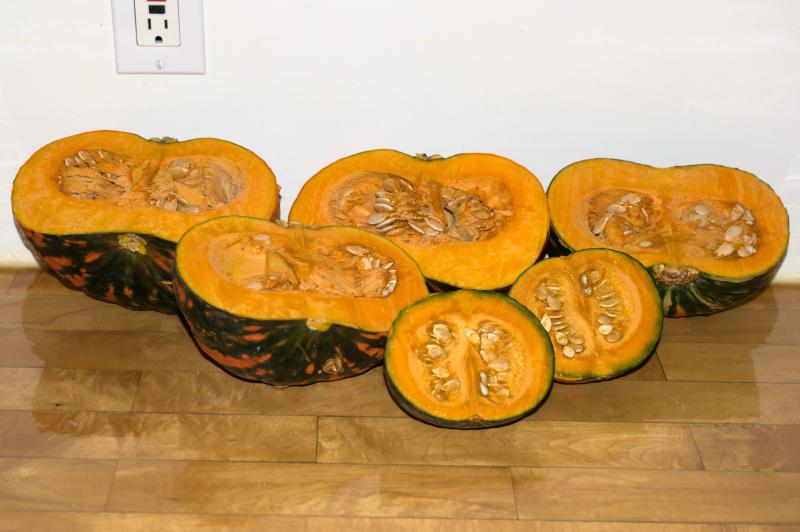 When done those slabs cook up nicely. These are still a bit more moist than the following green squash though so I do like growing the green ones too for blending them all together. 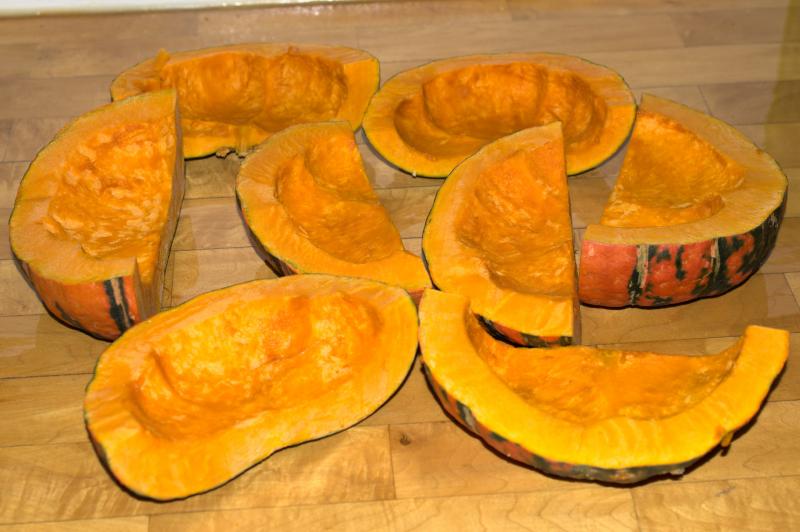 The driest and really good tasting squash. I almost like these as much as a Buttercup. I mix these with all the rest to get a blend of squash and then I freeze it so we can have squash for the next year. You can see that some of the green squash have some brown or orange to them too. 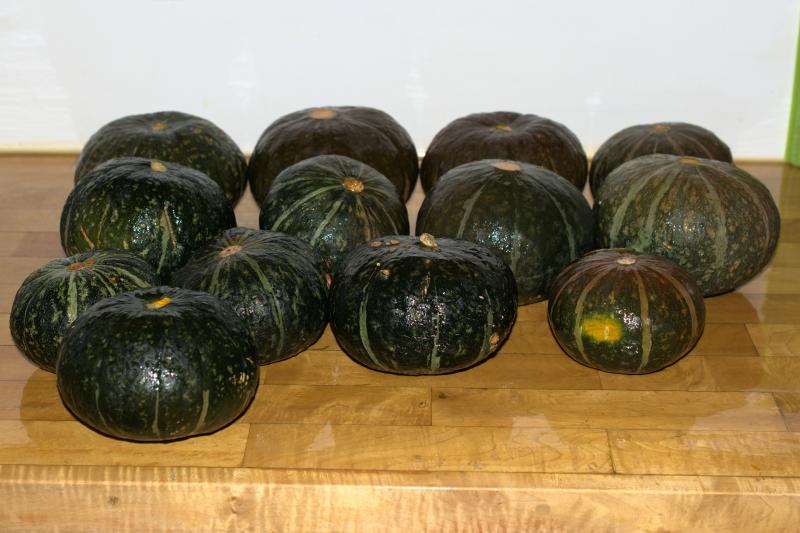 That was the end of the prep work for the squash this year but I still had to roast them and then scrape the goodies out of the skins, mash and then put it all in the freezer. I had all the squash roasted and ready to mash but had to finish that the next morning. It was a long but rewarding process and we’ll enjoy the results for the next year. 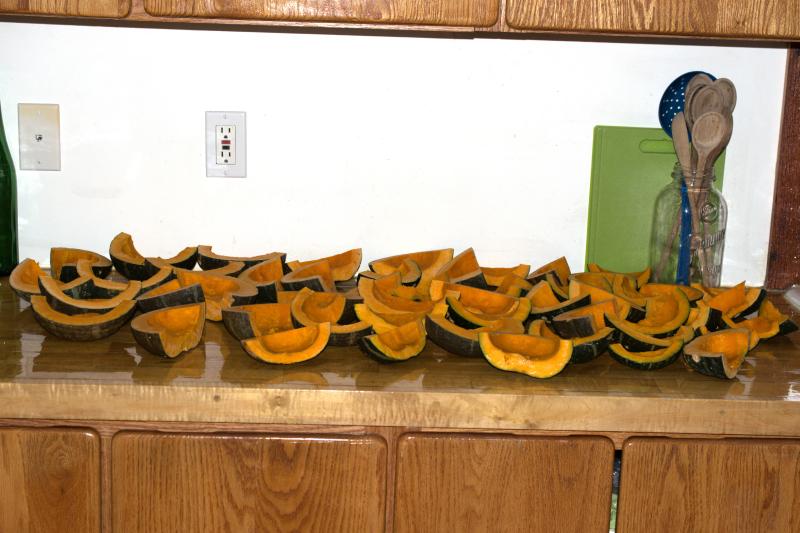 What I was able to harvest from the best patch I show the first one I cleaned up with how much innards, seeds and rinds there were. It was not a particularly large squash (about 10cm across). The seeds may not be the best developed (luckily I have three other squash yet to be processed).

To prevent damage to the seeds and wondering how many I had that would be viable I scored the outside of the squash with the knife but did not cut all the way through once I could feel the knife had made it through the skin enough - that method worked well for these squash (I only cut a few seeds). 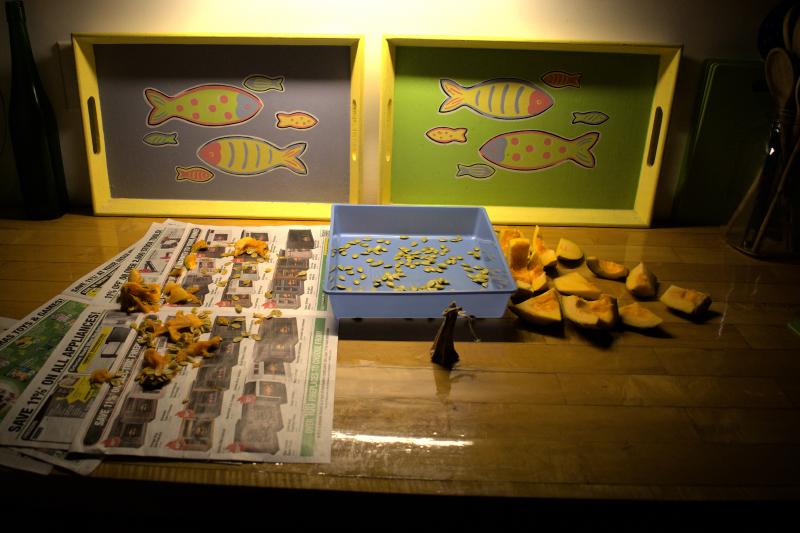 A close up of the first batch of seeds. 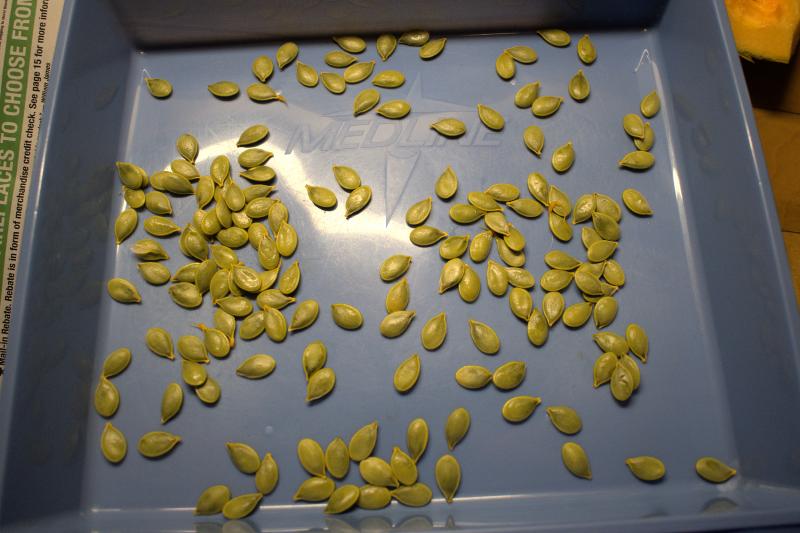 The second squash from the first lot was much larger in comparison and the seeds seemed to be more developed and darker. 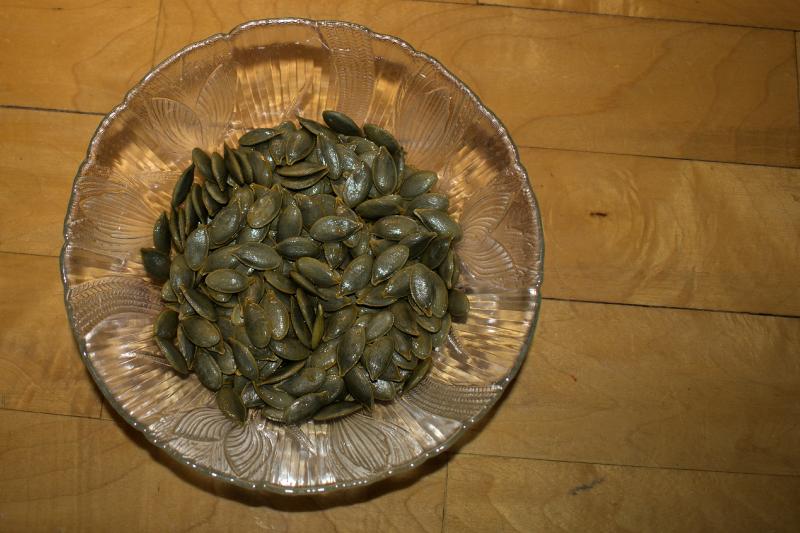 I cooked the second squash because it looked like perhaps it might be edible enough. It had a very mild flavor with just a hint of bitterness. The texture was very different and kind of slimy/creamy. Adding butter helped, adding spices made it very edible and to the point where the texture no longer bothered me and I felt like I was eating a pie custard. It was not my favorite squash by far, but as a second use squash that can be turned into something else it was not a complete loss compared to the squash I cooked from these green seeded squash last season that tasted really bland and I had no desire to use that at all. This is acceptable if I had nothing else. I’d say the flavor was mild Acorn and the texture was strange but could be rescued perhaps. 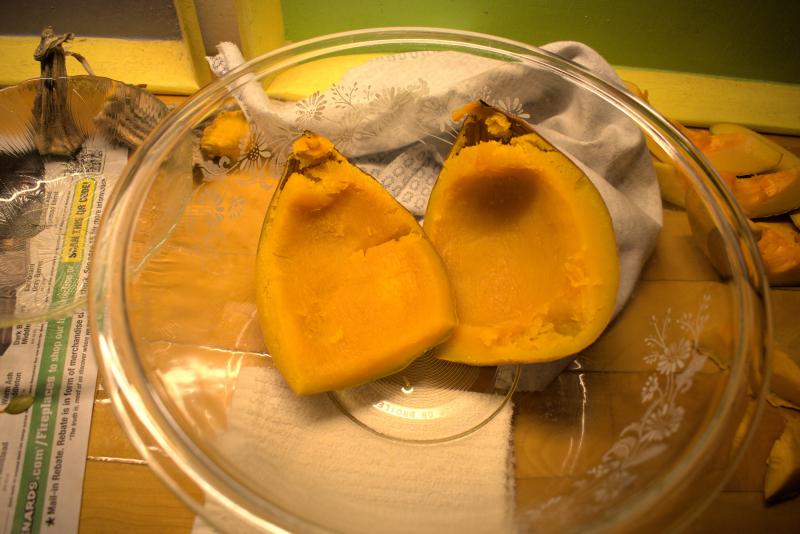 The third squash was from the 2021_04 Lot and the seeds seemed ok but smaller as the squash itself was fairly small. I did not bother to cook this one up. Had leftovers from the previous one enough for tomorrow. 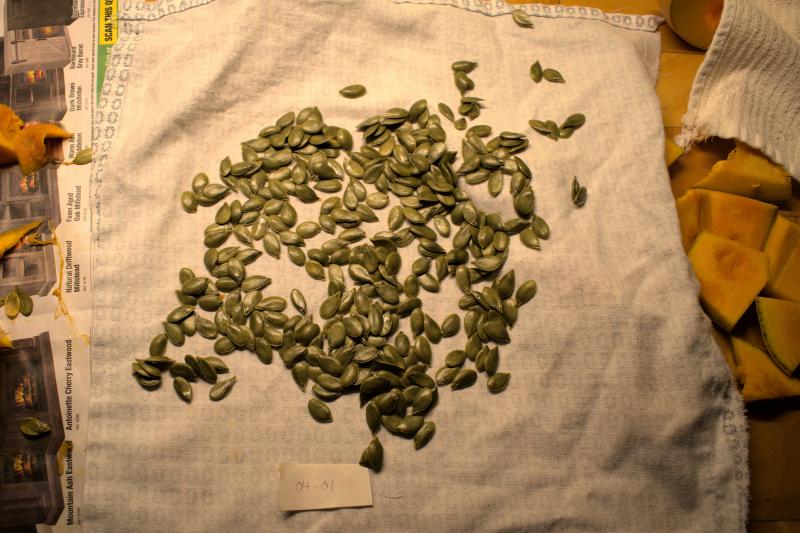 The last squash I processed on this day was also ok. Did not cook it either. I only had two squash from the 2021_04 Lot patch (six others I harvested later were not fully developed). 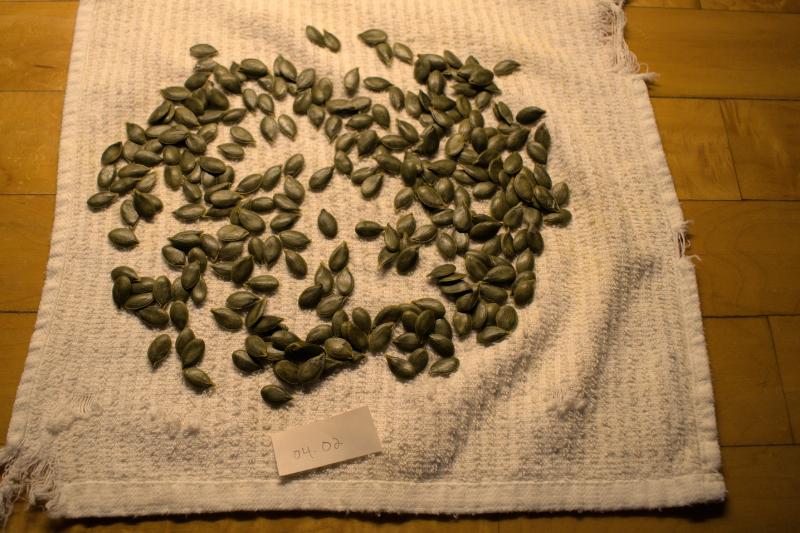 Dried seeds, the lighter ones were not as well developed and I’m not sure if they are viable. 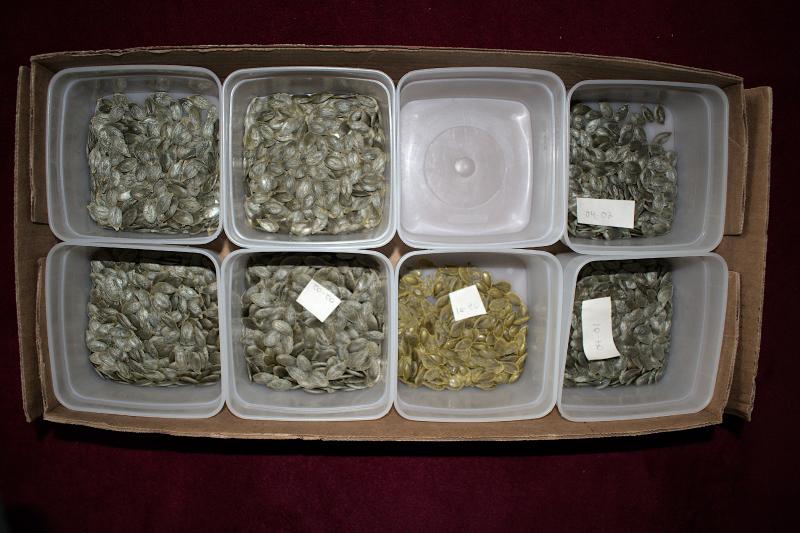 Our winter squash storage is not that great so I have to process these for longer term storage (roasting them up and then blending together and freezing) within a month or two. The most interesting squash to me is the lighter colored Hubbard squash to the lower left - I’ll definitely be saving seeds from that one to replant. 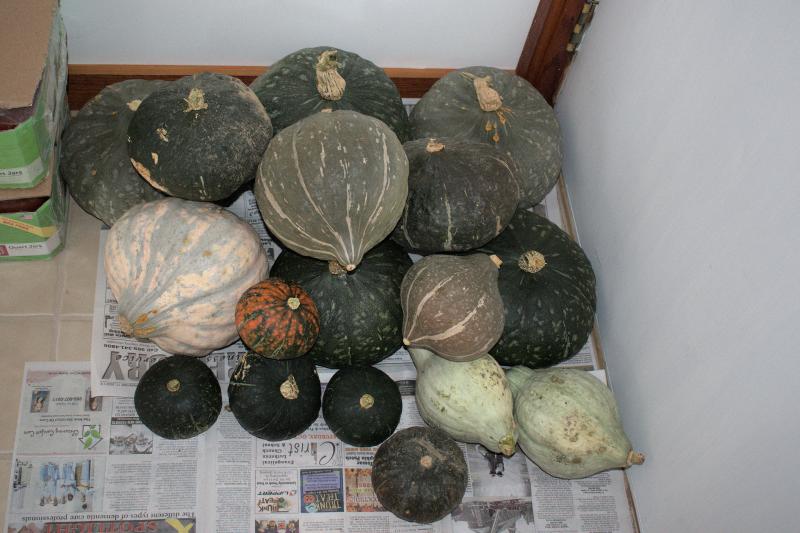