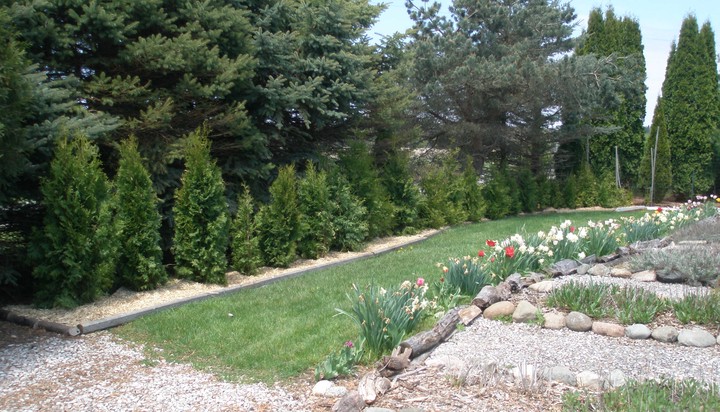 The above cedar trees got moved, but since then we’ve had to put a fence along them to discourage the deer from eating them back to nothing.

Getting the following garden expanded from before. It used to be just a thin line down the middle that we planted with perennials and then eventually garden vegetables - the rest of the space was covered and mulched. Since I had to weed it and the woodchips had decayed enough to be used in another garden last fall I switched out the subsoil from the first strawberry garden (that project described below) and replaced it with a mix of all the scrapings from the top of this garden along with some of the subsoil. Which left this garden waiting for spring for me to finish the edges and tidy the pathway up again. I need to wear my glasses when taking pictures, I didn’t notice the edge had fallen over until I was editing this picture. Hahaha… :) 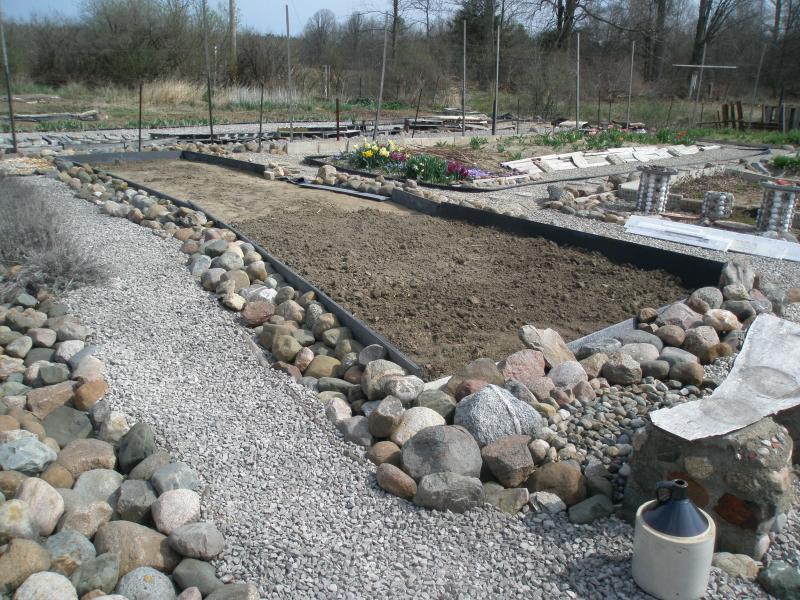 After spending time the past few weeks trying to keep groundhogs from reusing their den site that they’ve had for many years… I plugged it up late last fall. Hoped they would not come back, but this spring they’ve dug back out a few times so far and I’ve kept plugging it up again and they’ve dug out again. This morning I went out to check on them again and they’d opened up shop again. After plugging yet another time I also decided I had better check under the pallets which are covering a drainage channel that has some drain tube at the bottom. At times the rabbits, chipmunks and yes groundhogs use this as a place to hide and then raid gardens and I’ve wanted to fill it in and shift the neighboring pathway over several feet to reclaim the space for gardening instead of having so much crushed limestone pathway. Since I’m working on the neighboring edge anyways and will have to take it up to get rid of invasive grasses I decide I may as well start at the far end and gradually work my way closer to the house as I get time and fill.

The pallets are gradually rotting away anyways and it is all very much a hazard. I would also like to have an easier way across back there than walking over the pallets or a piece of wood.

While I was looking under there I did find what is likely a beginnings of a rabbit home and found a chunk of leftover drain tube to use as a second one to put down there (less fill and I will need one more drain going through there). If we get any breaks in the weather I’ll get that end redone and start on this, but I expect it will take me several years to finish it. Any fill has to be brought in a wheelbarrow at a time or carried back there in buckets. Plus I have many other projects going on soon so this will be a very low priority project for when I’m between other things. Um, yeah… :) It’s a big mess to clean up and make look nicer, but it is fun to have a mess once in a while. 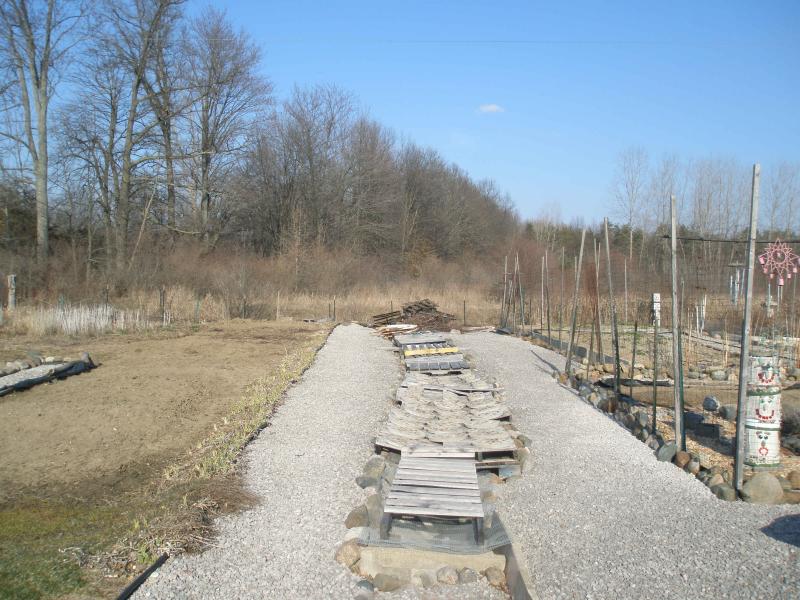 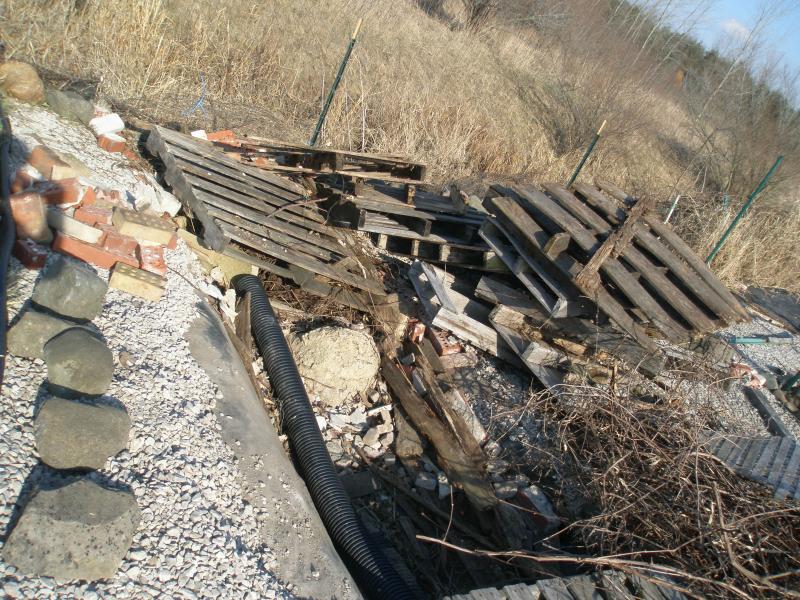 p.s. Nice pile of wild grapevines I have to finish chopping up soon and clean up around there some.

The very first strawberry patch that I set up has needed to be renovated for a few years now so I finally got around to it this season. The first picture is from how it looked before. I mounded it up and put extra tulips in there but after several years I decided it wasn’t doing that well like that so it did need to be leveled. Also I wanted to move the heavy clay subsoil out of there and replace it with a mix of mostly decayed wood chips, topsoil, sand and a little of the clay. The next three pictures are that (before, during, after):

[Note: to the right I added on two years ago and it will get redone next time I get back to this garden - climbing up and down that hill to pick berries isn’t that easy] 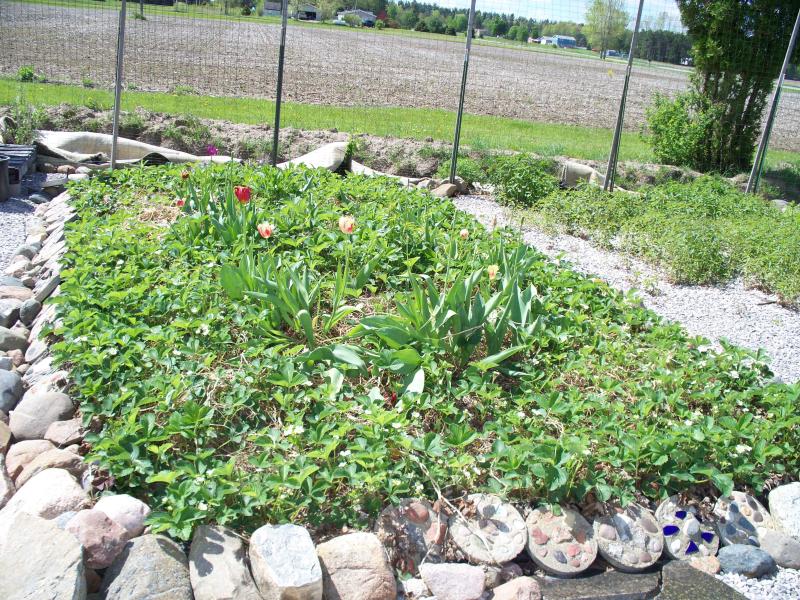 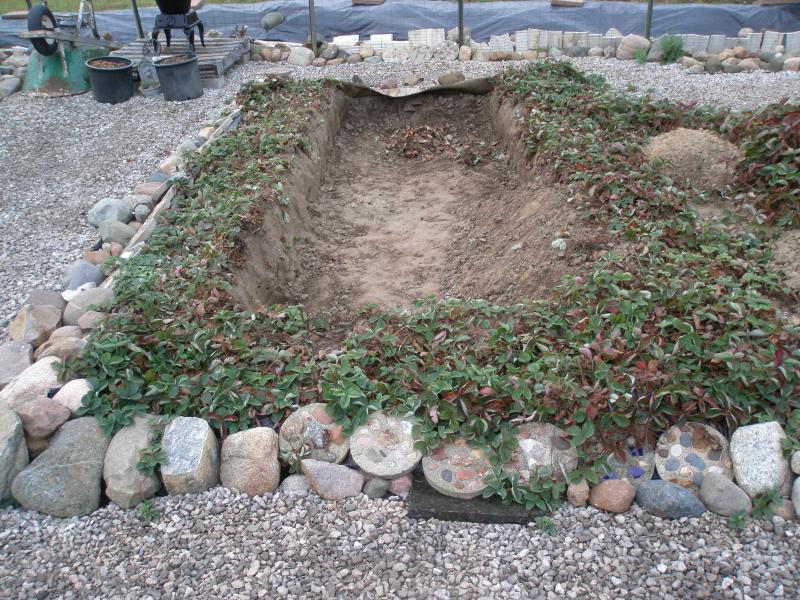 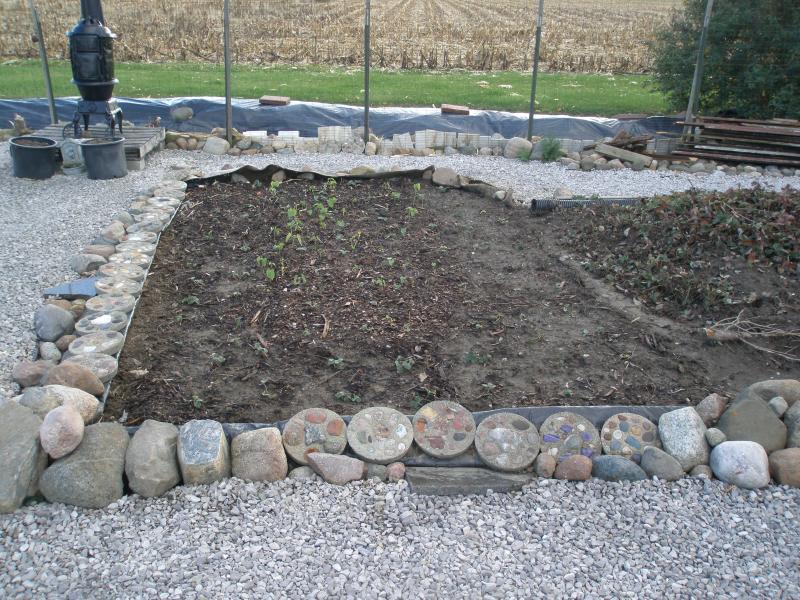 We moved the above cedar trees from their nursery area in the spring. We didn’t know the deer would find them during our winter and you can tell they enjoyed them. 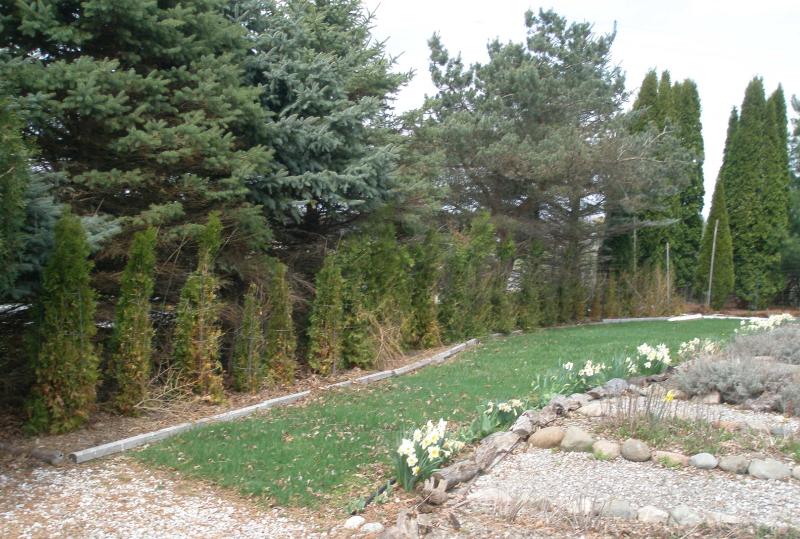 Over the years I’ve found out that while I liked the look of many smaller gardens it ended up being a lot more work to take care of them. Also, I didn’t like how much space was being used up by pathways. Now I have been putting more small gardens back together. 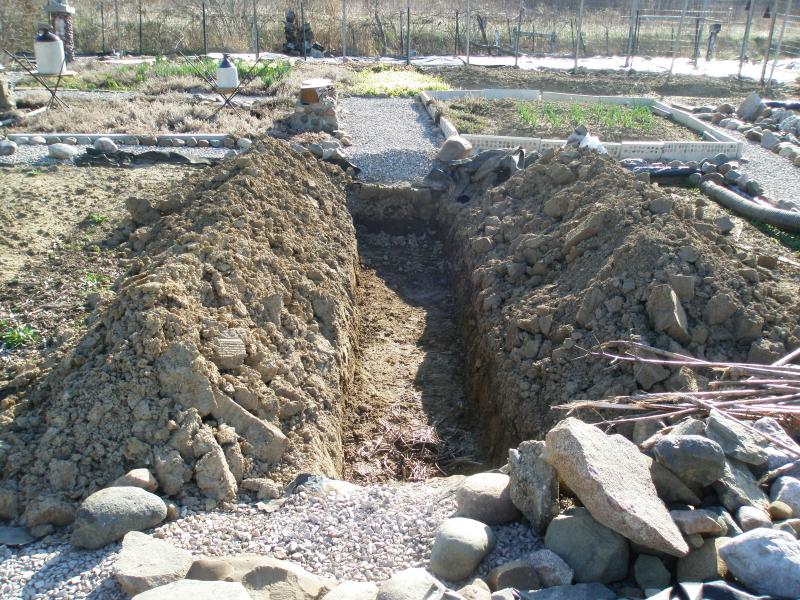 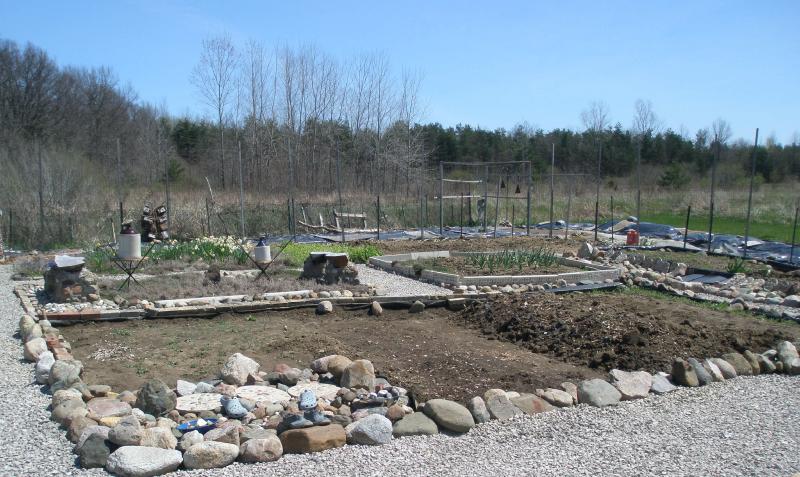 When free bricks are to be had for the hauling… 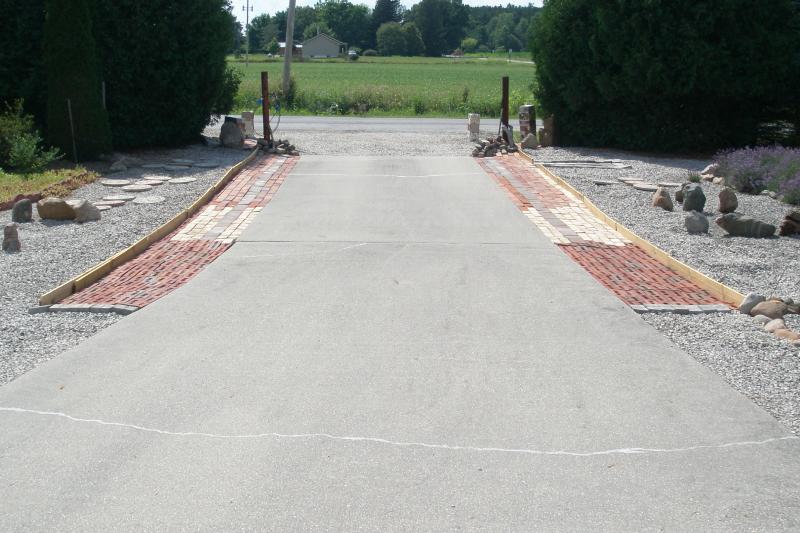 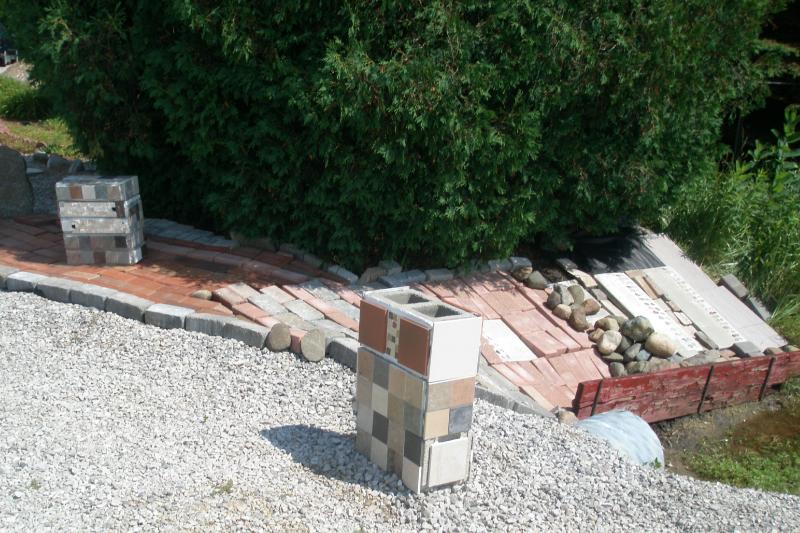 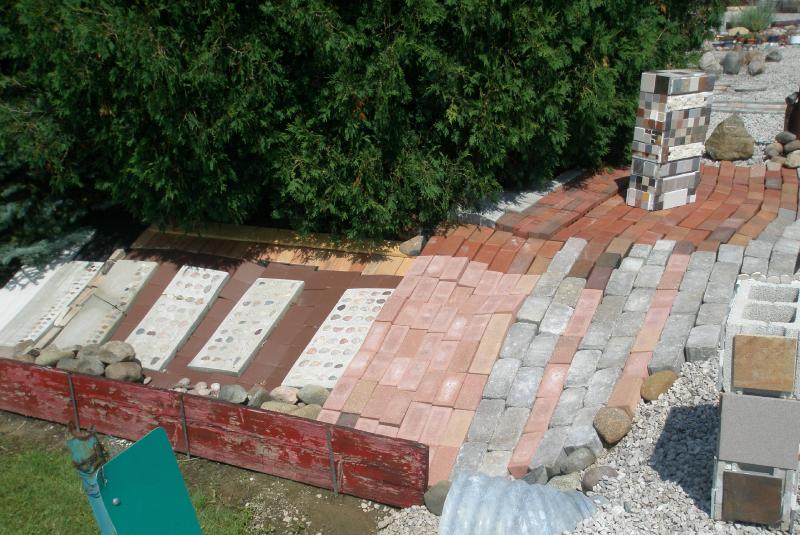 If anyone needs an example of why not to let morning glories grow on a fence along a pathway. It has been four or more years since we had those flowers and they dropped plenty of seeds - any time there are enough rains the seeds will sprout and try to grow. I’m always glad to have flowers, but some of them need to be kept places where any strays can be mowed. It is gradually improving, but I wonder how many more years I’ll need to keep weeding that pathway a few times a season. The gravel in that pathway is deep enough that very few weed seeds will grow there, but morning glory seeds seem to be one of them that can do it. 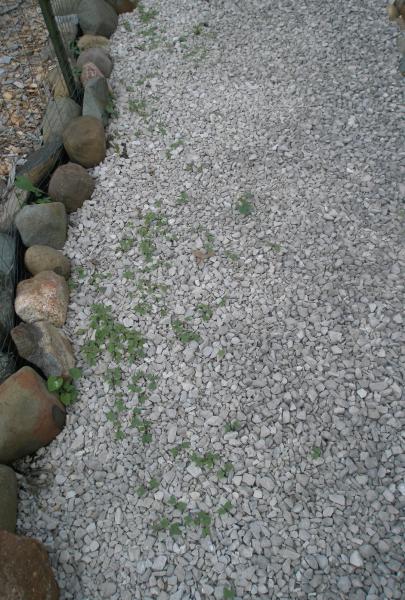 The pallet/ditch project I started hoping to have it finished before this winter. Way too much rain this season so I’ve been only able to get about halfway with what I was hoping to have done by this point. 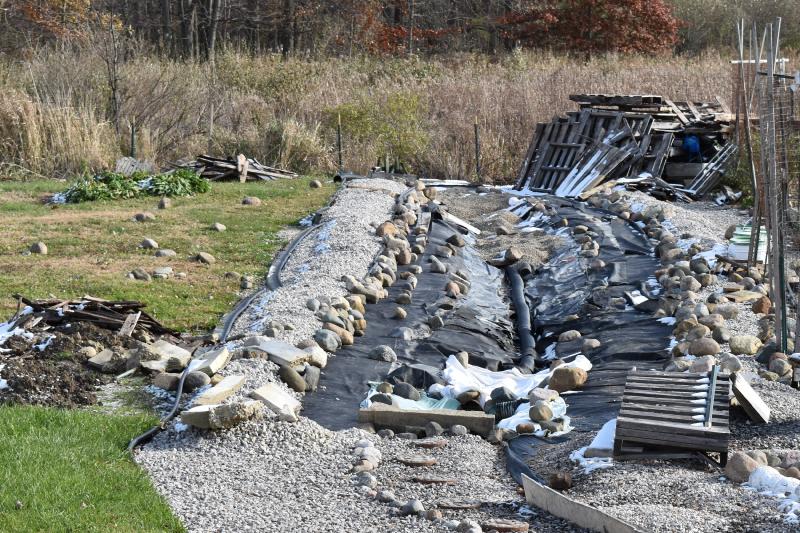 The other part of the pallet/ditch project. I am pulling drain tubes and pea gravel from this large tulip garden which doesn’t have too many tulips in it any longer. This will let me expand the garden to fit the space it was originally meant to occupy and all those drain tubes and gravel weren’t really needed. I will still have a drain tube under there, but only one part of it which surrounds the Lily garden and then it runs straight back to the large drainage ditch. 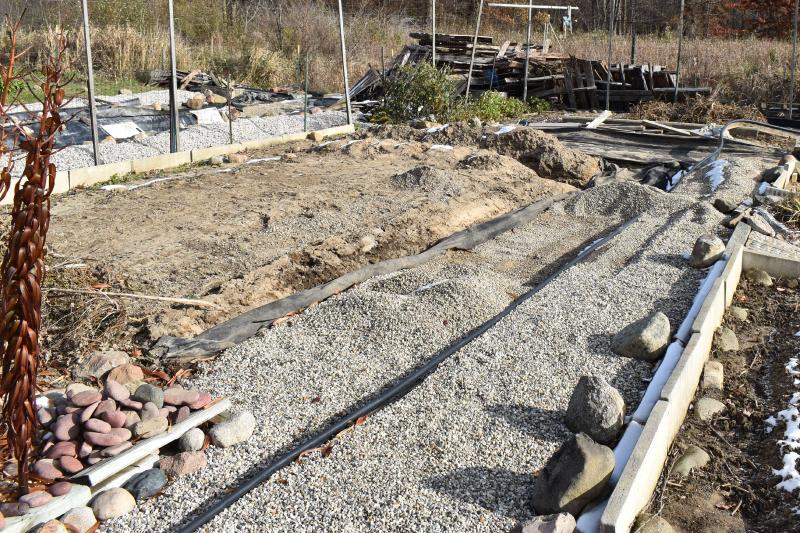 The ground has thawed out and is dry enough so it is a great time to get some projects done before I need to do any planting or other things - which means I can start cleaning up the mess I made last fall. The boss will be very glad to not have to look at this pile for much longer. In the foreground at the edge of the grass and into the dirt you can see the transistion from the front yard where it ends at the mostly clay subsoil. This area has been gardened for a good number of years and the soil is in pretty good condition. As you go further back towards the fence it is more clay, but still very fertile. I hope I can get the entire area along the gravel pathway all the way back to the further fence/ditch/rhuybarb patch as it is much easier to take care of an edge that doesn’t have grasses and other weeds growing right next to it. Might take me some weeks to get that far as I have a lot of other things to do too. If the weather cooperates and my body can do it, it will get done. More space for beans and peas is always welcome. 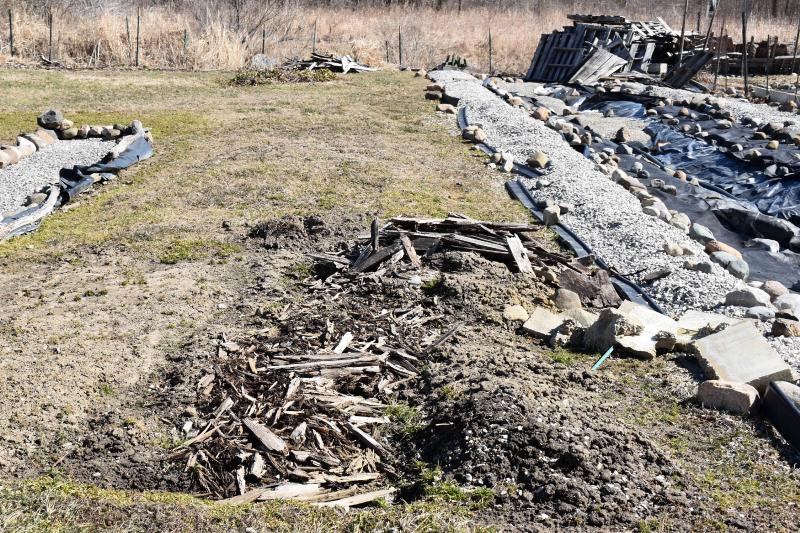 I’m continuing to work on the pallet project and am happy with the progress. Two of the three drain tubes have been removed from the larger tulip garden and that let me move all of the pea gravel that was around that garden and also being used for pathways. You would think that with how it all turned out that I planned it this way from the start. 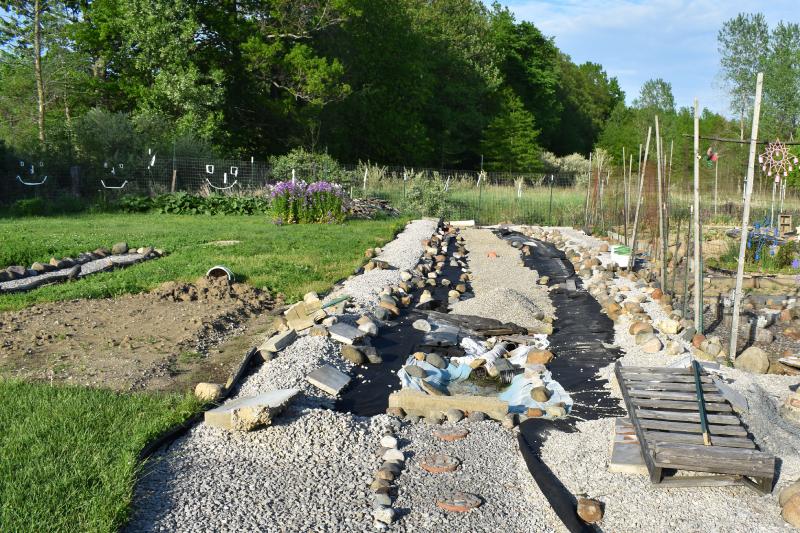 Almost done, but first I have to get one last piece of drain tube out of there and some pea gravel. After that is done I can level the garden - I have to plant it soon! 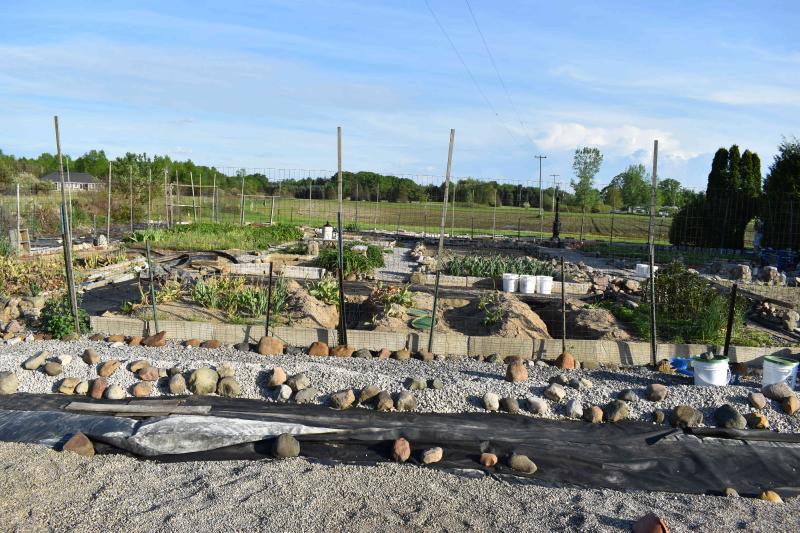 The NE Corner of the SE Garden (also commonly called the fenced garden) which is somewhat redone. Removing several pathways and consolidating parts of four smaller gardens to make a larger area. This is already much easier to care for since I will no longer have to weed those pathways and along those edges. It is not completely done yet, but it will have to do for this year because I really need to get to the garden in the background to the left to finish that up and get it planted in the next few days. The very corner garden (about 20 feet x 20 feet) of the SE garden is the original garden that Mom first started with way back in the mid-90s (I’m not sure of the exact year but I will find out that detail eventually). 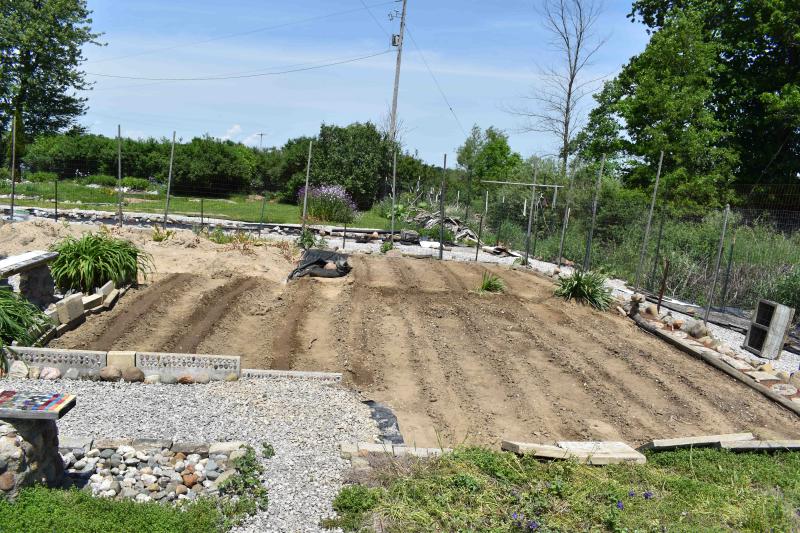 Next to the NE_Corner of the SE Garden was finally planted and watered (this used to be called the Large Tulip Garden, but most of the tulips have been relocated) after the drain tubes and the pea gravel were removed. It will be easier to take care of now because it is more level and bigger! Of course it was planted with beans. There is still some work to be done around it with some pathways to figure out, but that will come later. I have a lot of other gardens that have been ignored while I was trying to get this garden ready and planted. 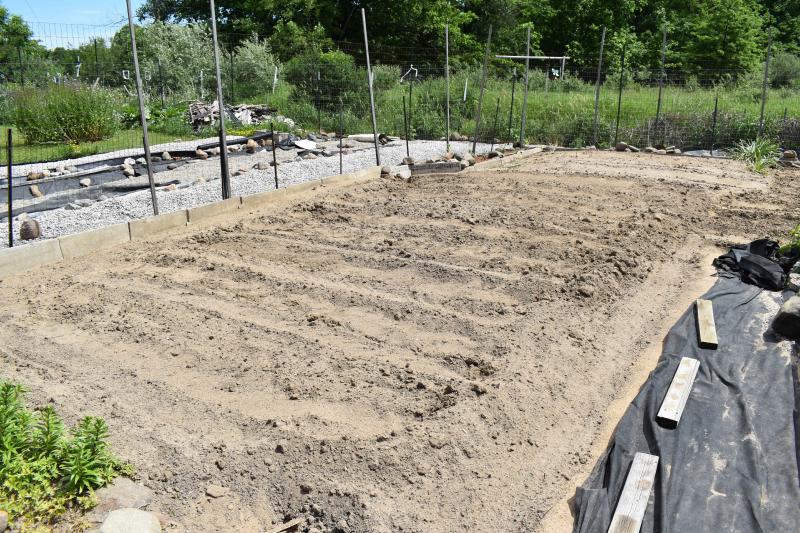 Those pallets are gone, draintubes moved, filled back in, pathways put back together. I didn’t think we’d get back to it until October but cleaning up wasn’t nearly as much work as getting everything else done. Looks so much better and much safer too! 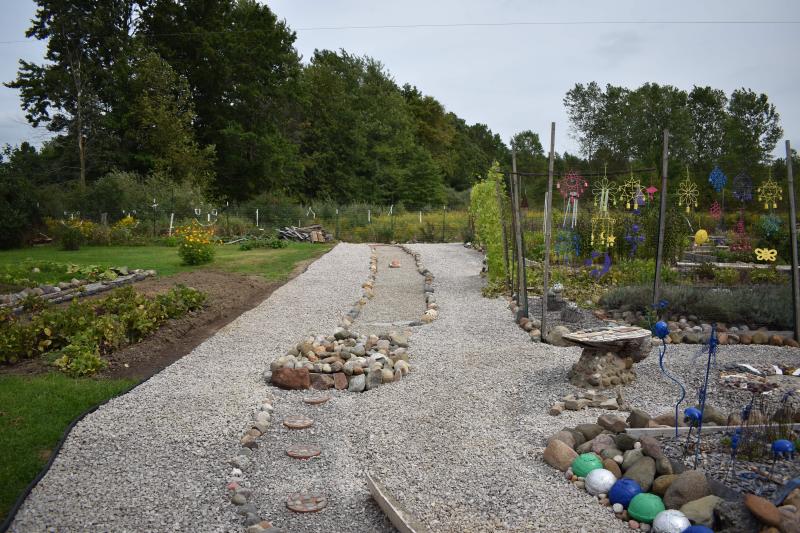 The view from out back. 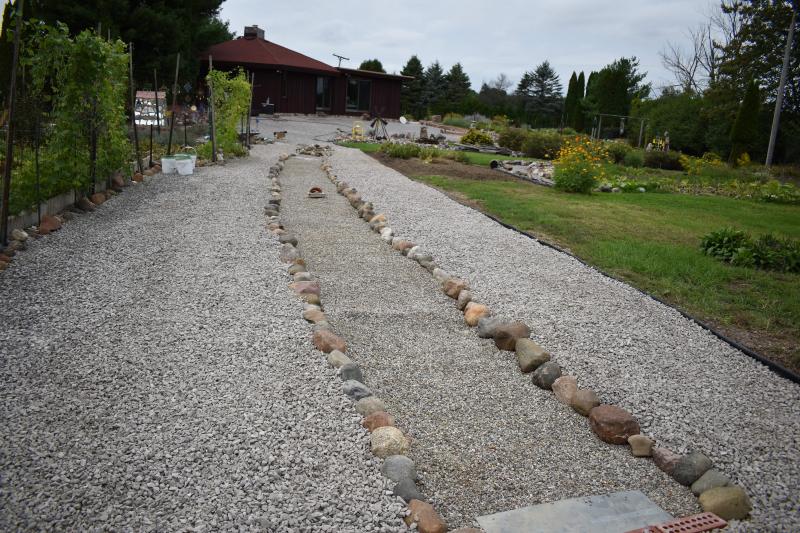 The back pathway is much nicer now with no more critter highway coming through there from the large drainage ditch. 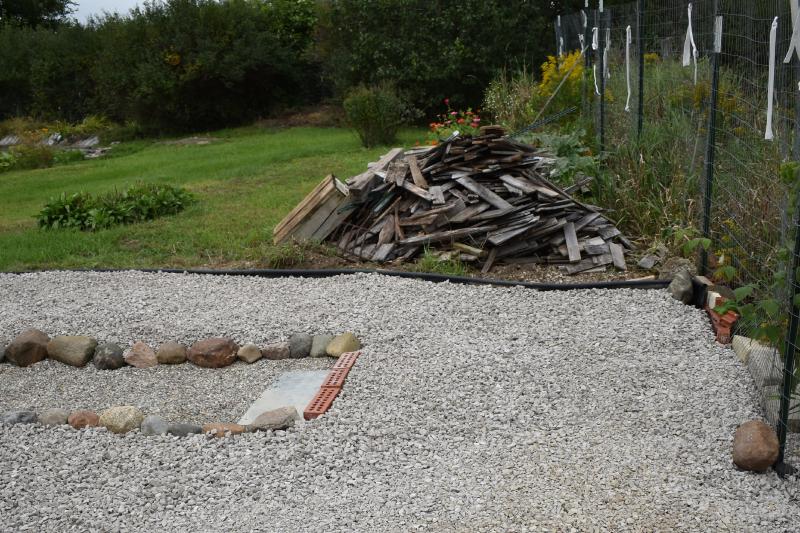 The old wood from the pallets got put to use as hardwood flooring to cover up the black plastic. I don’t think we can dance on it, but it does look very nice compared to what it was before. 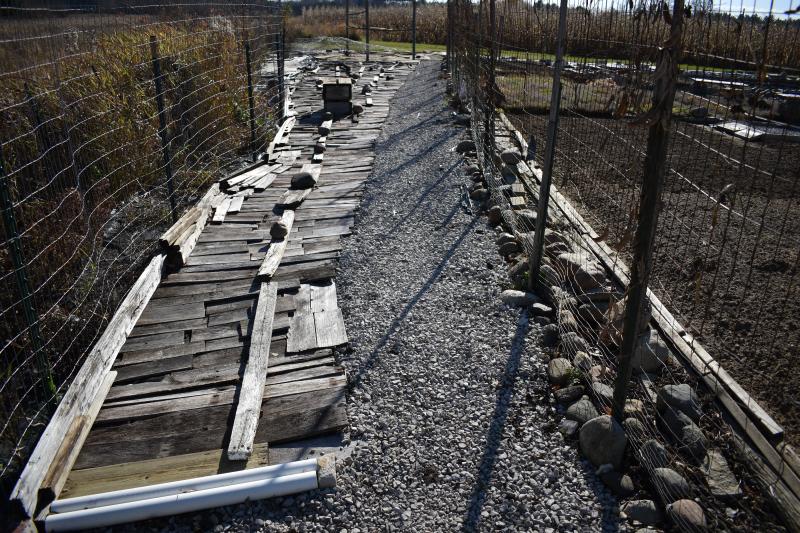 This is as far as I managed to get those weeds cleaned up. I wanted to get all the way to the back where the rhubarb is at as that makes that whole edge much easier to take care of if there aren’t weeds growing right up against it, but also with all those extra weeds gone that makes for a lot less weed invasion in the future. 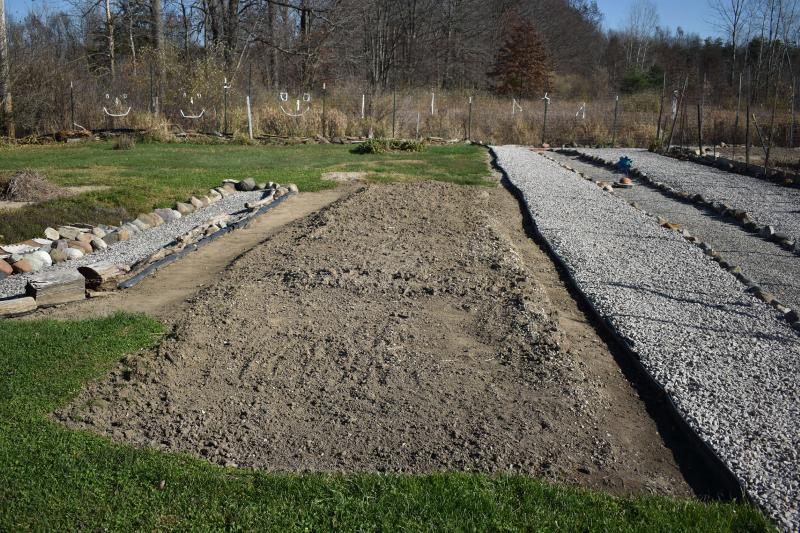 The SE Garden is ready for winter and it is so much nicer and easier to plant, weed and harvest. This year I was also able to finally get some ashes put down and mixed in somewhat as I was burying garden debris. During that I could also mix up some of the subsoil clay in layers to help that mostly sandy soil improve in nutrient and water holding capacity. This expanded area was put to good use this season growing beans. 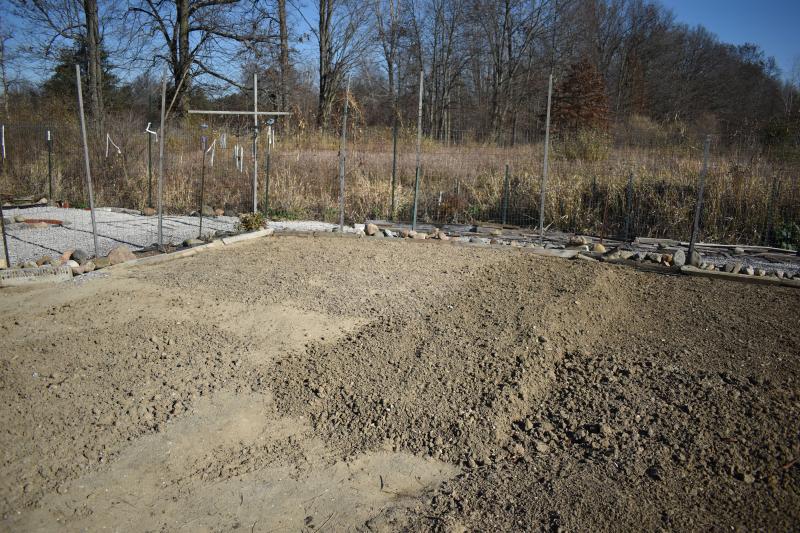 Some people have mentioned to me that they don’t see weeds in our gardens. Haha, well they are for sure around but I don’t often feature them in pictures because they remind me of work that needs to be done. Here is a picture of one project I will try to finish up this fall, but if I can’t get it done this fall I hope to finish it up next spring. The daylillies have a lot of grass, clovers and some others in there that don’t belong. 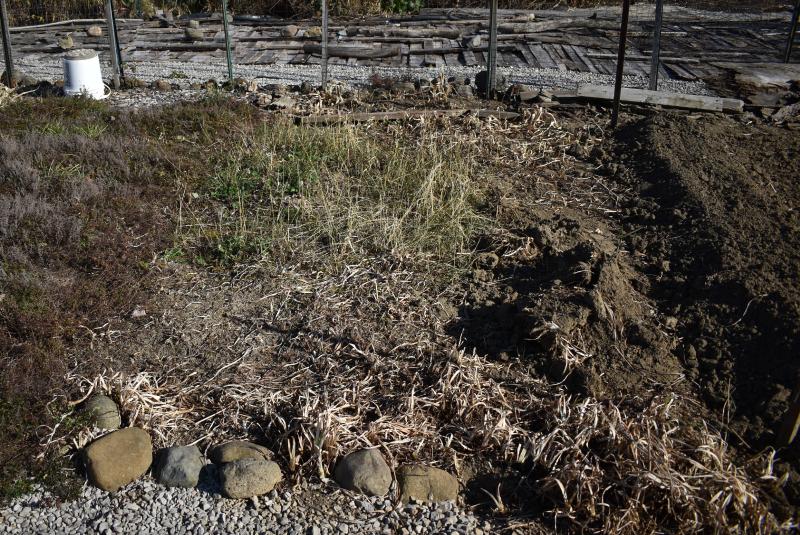